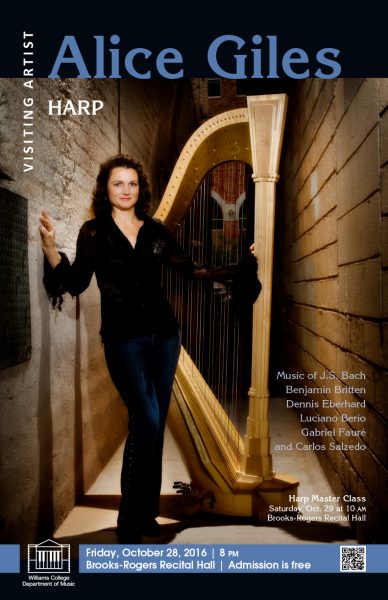 The program covers repertoire from a variety of composers and eras. She begins the program with her own transcription of J.S. Bach’s Suite BWV 996 E-Minor, which was originally scored for lute. This is followed by Benjamin Britten’s Suite for Harp op. 83, and Dennis Eberhard’s Especially. After an intermission Ms. Giles continues her exploration with Sequenza II by Luciano Berio and Gabriel Fauré’s Une Châtelaine en sa Tour. This grand survey of music for harp closes with Jolly Piper – Concert Fantasy on the Theme of “The Sailor’s Hornpipe” by Carlos Salzedo.

About Alice Giles
Alice Giles has been celebrated as one of the world’s leading harp soloists. The Australian-born musician first attracted international notice when she won First Prize in the 8th Israel International Harp Contest at the age of 21. Since then she has performed extensively internationally both in recital and with orchestra. She presented her first solo recital at the age of 13 at the Sydney Conservatorium of Music, was awarded the coveted Churchill International Fellowship and an Australia Council Grant to study in the USA and made her New York debut recital at Merkin Hall in 1983.

Regarded by Luciano Berio as the foremost interpreter of his Sequenza II, she has taken part in tributes to Berio at the Queen Elizabeth Hall London, Salzburg Mozarteum, and at the 92nd Street Y in New York to honour his 70th birthday. She has given many premiere performances for her instrument, has commissioned a complete program of works for the electro-acoustic harp, and is Director of the Seven Harp Ensemble (SHE), which has commissioned many new works by Australian composers.

As a recipient of an Australian Antarctic Arts Fellowship, she performed a solo concert at Mawson Station in 2011 commemorating the Centenary of the first Australasian Antarctic Expedition.

She was the Chair and the Artistic Director of the 2014 World Harp Congress in Sydney in July 2014 and is founder and director of the Harp Centre Australia, a non-profit organization dedicated to promoting the harp in Australia. She was on the jury for both the 1998 and 2009 International Harp Contests in Israel, the 2004 USA International Harp Competition, 2007 V. Salvi European Harp Competition Cardiff and the IX Concourso Nationale d’Arpa ‘Victor Salvi’. Her two main teachers were June Loney (Sydney Symphony Orchestra) and Alice Chalifoux (Cleveland Orchestra), also studying with Lydia Shaxson and Judith Liber.