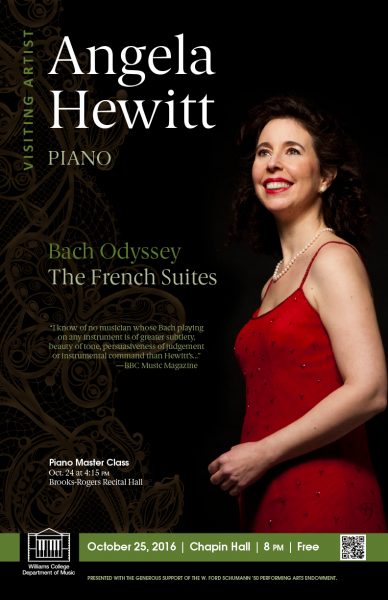 The Williams College Department of Music presents Angela Hewitt, piano on Tuesday, October 25 at 8 p.m. in Chapin Hall on the Williams College campus. There is also a master class featuring talented Williams student pianists on Monday, Oct. 24 at 4:15 p.m. in the Brooks-Rogers Recital Hall. These free events are open to the public.

Angela Hewitt is known for her interpretations of the keyboard works by J.S. Bach. She presents an all-Bach program that includes the French Suites No. 1, 2, and 4, followed by an intermission. In the second part of the program she plays Bach’s French Suites No. 6, 3, and 5.

One of the world’s leading pianists, Angela Hewitt appears in recital and with major orchestras throughout Europe, the Americas and Asia. Her interpretations of Bach have established her as one of the composer’s foremost interpreters of our time.

Angela’s award-winning cycle for Hyperion Records of all the major keyboard works of Bach has been described as “one of the record glories of our age” (The Sunday Times). Her much-awaiting recording of Bach’s “Art of Fugue” appeared in 2014, and immediately hit the charts in the UK and USA. Her discography also includes albums of Couperin, Rameau, Mozart, Beethoven, Chopin, Schumann, Liszt, Fauré, Debussy, Chabrier, Ravel, and Granados. With conductor Hannu Lintu she has recorded two albums of Mozart Piano Concertos (the most recent one with the National Arts Centre Orchestra won a Juno Award in Canada), the Schumann Piano Concerto with the DSO Berlin, and Messiaen’s “Turangalila Symphony” with the Finnish Radio Symphony. New releases include her first disc of Scarlatti Sonatas, and her sixth volume of Beethoven Sonatas (including “Les Adieux”). Last year Angela was inducted into Gramophone Magazine’s “Hall of Fame” thanks to her popularity with music lovers around the world. Her second recording of Bach’s Goldberg Variations will be released on 30 September 2016.

At the invitation of London’s Wigmore Hall, Angela will perform the complete keyboard works of Bach in a series of twelve recitals over four years, beginning in September 2016. “The Bach Odyssey” will also be presented complete in New York (92nd Street Y), Tokyo, and Ottawa. Recitals in the 2016-17 season will take her to such diverse places as Talinn, Tivoli (Copenhagen), Vienna (her solo debut), Madrid, Bilbao, Aldeburgh (Snape Maltings), Rotterdam, Bath, Florence, Singapore, and all over Australia (Musica Viva tour in May 2017). Concerto appearances will include the National Arts Centre Orchestra in Ottawa (with Alexander Shelley), the Baltimore Symphony (with Hannu Lintu), the Montreal Symphony (with Kent Nagano), a tour of the UK with the Vienna Tonkünstler Orchestra, and with the Lucerne Festival Strings in Munich (conducting from the keyboard). She also continues to perform with authors and actors, most recently with Ian McEwan (in Vienna and New York), Julian Barnes (in Vienna’s Konzerthaus in April 2017) and Roger Allam (at Shakespeare’s Globe in London).

Born into a musical family, Angela began her piano studies aged three, performing in public at four and a year later winning her first scholarship. She then went on to learn with French pianist, Jean-Paul Sévilla. In 1985 she won the Toronto International Bach Piano Competition.

In July 2005, Angela launched the Trasimeno Music Festival in the heart of Umbria near Perugia. An annual event, it draws an international audience to the Castle of the Knights of Malta in Magione, on the shores of Lake Trasimeno. Seven concerts in seven days feature Hewitt as a recitalist, chamber musician, song accompanist, and conductor, working with both established and young artists of her choosing.

Angela Hewitt is an Ambassador for The Leading Note Foundation’s “Orkidstra”: a Sistema-inspired, social development program in Ottawa’s inner city which, through the joy of learning and playing music together, teaches children life-skills such as commitment, teamwork and tolerance. She is also in great demand for masterclasses around the world, generously sharing her knowledge and experience with young pianists.

Named ‘Artist of the Year’ at the 2006 Gramophone Awards, she was awarded an OBE in the Queen’s Birthday Honours in 2006. In 2015 Angela was promoted to a Companion of the Order of Canada. She is a member of the Royal Society of Canada, has seven honorary doctorates, and is a Visiting Fellow of Peterhouse College in Cambridge.

Angela Hewitt is presented by the Williams College Department of Music with the generous support of the W. Ford Schumann ’50 Performing Arts Endowment.