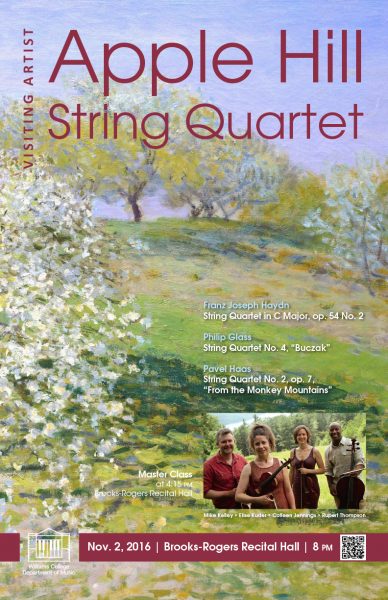 The Williams College Department of Music presents Apple Hill String Quartet on Wednesday, November 2 at 8 p.m. in Brooks-Rogers Recital Hall on the Williams campus. On the same day and in the same venue the quartet also offers a composition reading at 2:35 p.m. and a master class at 4:15 p.m. All of these events are free and open to the public.

Apple Hill String Quartet (Elise Kuder and Colleen Jennings – violins, Mike Kelley – viola, Rupert Thompson – cello) offer a program that starts in the classical era with String Quartet in C Major, op. 54 No. 2 by Franz Joseph Haydn, followed by a more contemporary work by Philip Glass, String Quartet No. 4, “Buczak.” In the second half of the program they present String Quartet No. 2, op. 7, “From the Monkey Mountains” by Pavel Haas.

Since its founding in 2007, the Apple Hill String Quartet has earned praise around the world for its concerts presenting interpretive mastery of traditional repertoire – including Haydn, Mozart, Schubert, Schumann, Beethoven, and Ravel – as well as for world premieres and commissioned pieces. As resident musicians at the Apple Hill Center for Chamber Music, the Quartet is featured in the summer concert series held every Tuesday night at the Center in Nelson, N.H. These concerts attract hundreds of visitors and have become a mainstay of the Monadnock area summer music offerings.

Education is an integral part of the Quartet’s mission. For three months in the summer, the Quartet comprises the core faculty for five separate 10-day summer workshops held at Apple Hill and attended by 300 participants. During the regular concert season, the Quartet conducts mini- residencies in embassies, communities, schools, and universities from the Monadnock region to major U.S. cities and around the world as part of Apple Hill’s Playing for Peace program.

Founded in the early 1970’s, Apple Hill is a center of classical music performance and teaching, stewarded today by the organization’s Director, Leonard Matczynski, and ensemble-in-residence, the Apple Hill String Quartet. This group of professional musicians presents concerts through- out the world and, for three months of the summer, teaches and coaches chamber music to participants of all ages and levels at the Summer Chamber Music Workshop held each summer at Apple Hill’s 100 acre campus in the Monadnock region of New Hampshire. The organization’s innovative Playing for Peace program puts musicians of conflicting cultures together in chamber groups, enabling them to transcend national and cultural boundaries and work with one another in an atmosphere that promotes diversity, creativity, and understanding through excellence in music.