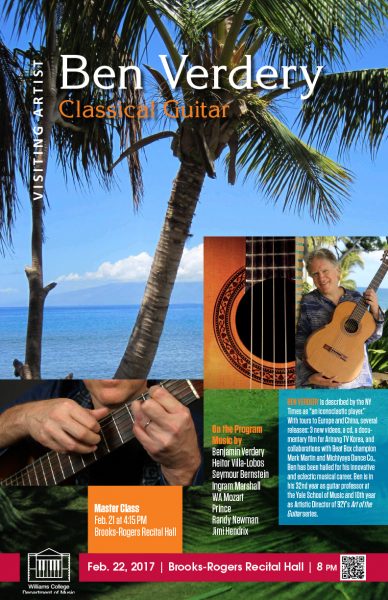 Prolific and versatile guitarist and composer Benjamin Verdery offers a performance that features works, some of which are inspired by others, but very much of his own making. This zealous proponent of music for guitar starts out with a piece of his own, Prelude & Wedding Dance. He moves on to Three Works Inspired by J.S. Bach, which includes, Bachianas Brasileiras #5 by Heitor Villa-Lobos, arranged by Roland Dyens; Searching for a Chorale, by Seymour Bernstein, who wrote the piece for Benjamin Verdery, and ending the set with Soepa by Ingram Marshall, a piece in three movements also written for Benjamin Verdery, composed for electric classical guitar with digital delay and loops. After a brief intermission come two more pieces by Mr. Verdery, Now and Ever, and From Eleven Etudes. Not to forget his roots in classical guitar, he next presents his arrangement of Adagio, K. 540 by Mozart. He ends the evening with his arrangements of some more contemporary fare, “Three North American Songs”, including Kiss, by Prince; In Germany Before The War, by Randy Newman, and Jimi Hendrix’s classic, Purple Haze.

Described by The New York Times as “an iconoclastic player,” Benjamin Verdery has been hailed for his innovative and eclectic musical career. In a recent interview Ben brought us up to date. “I had a fabulously exciting musical year (2016) including several releases: The Ben Verdery Guitar Project: On Vineyard Sound, new guitar music from my extraordinary colleagues at Yale, released by Elm City Records which I founded with my former student and dear friend, Sol Silber; a personal documentary shot in Korea for Arirang TV, ArTravel series and three videos including two protest videos: Chant For Peace and J.S. Bach’s Chaconne, subtitled An interpretation Celebrating the Earth, Sky and Sea. In addition, I was honored to perform an evening of my compositions including a new duo, From Aristotle, with Beat Box champion Mark Martin for the GFA and presented concerts and master classes in Holland, Germany, and England and hosted my 17th annual Maui Guitar Class.

I begin 2017 with a premier of Searching for a Chorale by one of my dearest mentor’s, Seymour Bernstein; curating and performing at the 92Y’s Guitar Marathon and embarking on a new solo work for the Changsha International competition in China.

I’m into my 32nd year as the guitar professor at the Yale School of Music and my 10th year as Artistic Director of 92Y’s Art of the Guitar series! It’s all coconuts!”