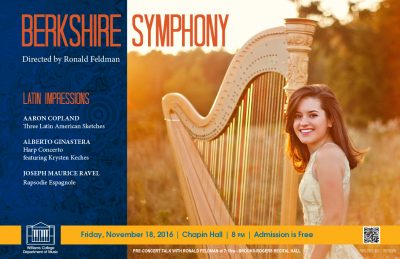 The Williams College Department of Music presents the Berkshire Symphony in concert on Friday, Nov. 18 at 8 p.m. in Chapin Hall on the Williams College campus. There is a pre-concert talk with conductor Ronald Feldman at 7:15 p.m. in Brooks-Rogers Recital Hall, adjacent to the main venue. In association with these events, harpist Krysten Keches, hosts a harp master class featuring the performances of outstanding Williams students on Thursday, Nov. 17 at 4:15 p.m. in Brooks-Rogers Recital Hall. The master class, pre-concert talk, and the concert are all free, unticketed, and open to the public.

Titled Latin Impressions, this concert begins with Aaron Copland’s vigorous musical tapestry, Three Latin American Sketches. Next comes guest artist and harpist Krysten Keches performing the Harp Concerto by Alberto Ginastera, a work of rhythmic drive and drama that reflect the composer’s Argentine roots. The final part of the evening is given over to one composer’s fascination with the sound and feeling of Spain. Maurice Ravel’s Rhapsody Espagnole, is an evocative sound portrait that has had tremendous and subtle influence ever since its premiere in 1908.

About Krysten Keches
Massachusetts native Krysten Keches has been called an “excellent young soloist” by the Boston Globe. She began harp lessons at age four with Elizabeth Morse and has since appeared as a solo, chamber, and orchestral musician at venues throughout the United States and overseas, including Carnegie Hall, Avery Fisher Hall, Royal Albert Hall, the Berlin Philharmonie, Teatro alla Scala, Shostakovich Hall, Harvard’s Sanders Theatre, and Boston’s Symphony Hall.

As the winner of the 2013 Boston Modern Orchestra Project concerto competition, Ms. Keches performed Alberto Ginastera’s Harp Concerto at Jordan Hall. She has also appeared as a soloist with the New England String Ensemble, Mistral Chamber Players, the Boston Youth Symphony Orchestra, the Australian National University School of Music Orchestra, and the Wellesley Symphony Orchestra. Additionally, Ms. Keches has been a prizewinner in the Boston Symphony Orchestra, New England Philharmonic, and New England Conservatory concerto competitions, and she was invited to play alongside Yo-Yo Ma and members of the Silk Road Ensemble to celebrate the 60th Anniversary of the Universal Declaration of Human Rights.

In 2010, Ms. Keches won a U.S. Fulbright Scholarship to study with renowned harpist Alice Giles at the Australian National University School of Music, where she earned a Graduate Diploma with high distinction. While in Australia, she performed as a soloist at Canberra’s Llewellyn Hall and was also broadcast in recital on ArtSound FM. 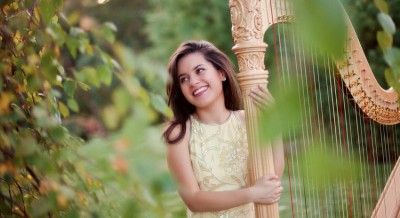