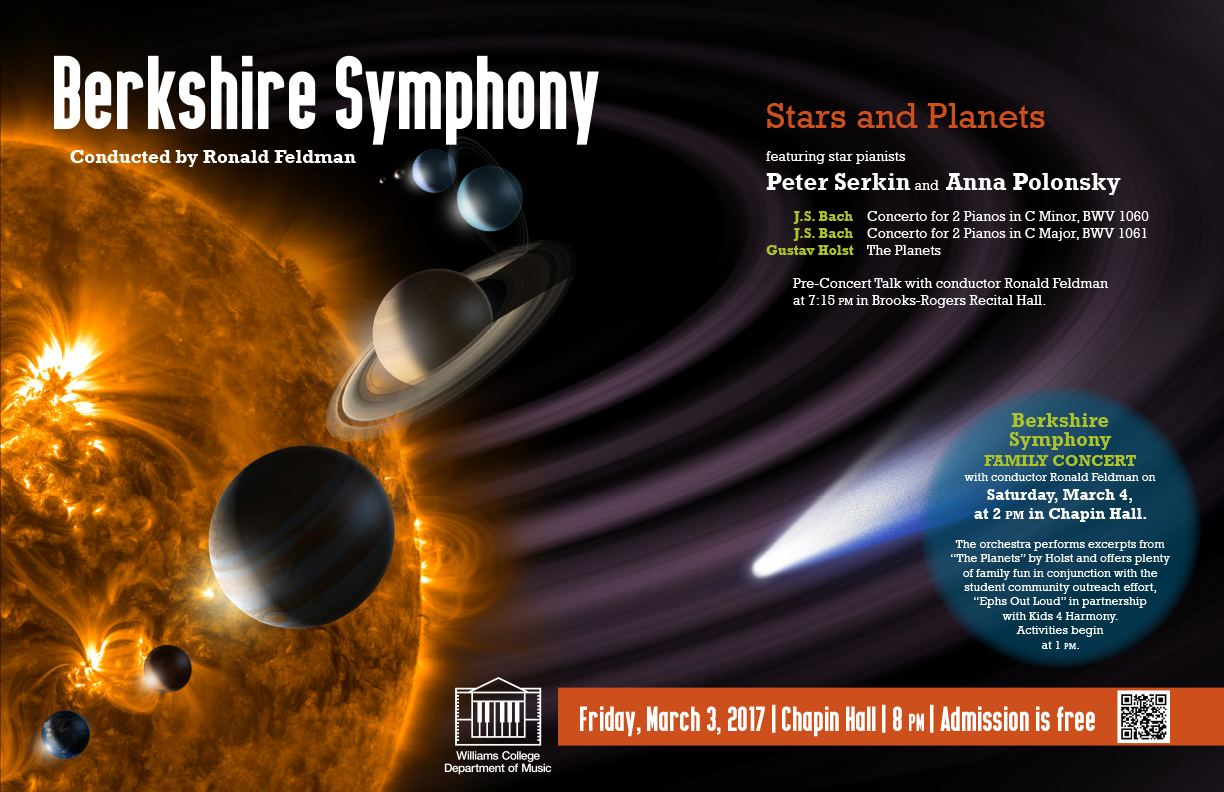 The Williams College Department of Music presents the Berkshire Symphony, conducted by Ronald Feldman, in a concert along with a host of associated events. All of these events are free and open to the public.

Berkshire Symphony offers concert titled “Stars and Planets” featuring star pianists Peter Serkin and Anna Polonsky playing the Bach Double Concerto in C Minor and Double Concerto in C Major. The Berkshire Symphony also offers Gustav Holst’s “The Planets” on Friday March 3, at 8:00 p.m. in Chapin Hall. There is a Pre-Concert Talk with conductor Ronald Feldman; Friday March 3, at 7:15 p.m. in Brooks-Rogers Recital Hall. Also, there is the Berkshire Symphony Family Concert with conductor Ronald Feldman which takes place on Saturday March 4, at 2:00 p.m. in Chapin Hall. The orchestra performs excerpts from “The Planets” by Holst and offers plenty of family fun in conjunction with the student community outreach effort, “Ephs Out Loud” in partnership with Kids 4 Harmony. This day of musical fun offers activities beginning at 1:00 p.m. that include a workshop with the Williams choirs, musical games and activities, and art by local elementary school students.

Recognized as an artist of passion and integrity, the distinguished American pianist Peter Serkin has successfully conveyed the essence of five centuries of repertoire. His inspired performances with symphony orchestras, in recital appearances, chamber music collaborations and on recordings have been lauded worldwide for decades.

Peter Serkin’s rich musical heritage extends back several generations: his grandfather was violinist and composer Adolf Busch and his father pianist Rudolf Serkin. He has performed with the world’s major symphony orchestras with such eminent conductors as Seiji Ozawa, Pierre Boulez, Alexander Schneider, Daniel Barenboim, George Szell, Eugene Ormandy, Claudio Abbado, Simon Rattle, James Levine, Herbert Blomstedt, Rafael Frühbeck de Burgos and George Cleve. A dedicated chamber musician, Mr. Serkin has collaborated with Alexander Schneider, Pamela Frank, Yo-Yo Ma, the Budapest, Guarneri, Orion and Shanghai String Quartets and TASHI, of which he was a founding member.  He has recently performed a duo-piano team with Julia Hsu.  They are devoting themselves to both one-piano, four-hands, as well as to two-piano music.

An avid exponent of the music of many of the 20th and 21st century’s most important composers, Mr. Serkin has been instrumental in bringing to life the music of Schoenberg, Webern, Berg, Stravinsky, Wolpe, Messiaen, Takemitsu, Henze, Berio, Wuorinen, Goehr, Knussen,  Lieberson and others for audiences around the world. He has performed many important world premieres of works written specifically for him, in particular by Toru Takemitsu, Hans Werner Henze, Luciano Berio, Leon Kirchner, Alexander Goehr, Oliver Knussen, Charles Wuorinen and Peter Lieberson.  Mr. Serkin has recently made several arrangements of four-hand music by Mozart, Schumann and his grandfather, Adolf Busch, for various chamber ensembles and for full orchestra.  He has also arranged all of Brahms’s organ Chorale-Preludes, transcribed for one piano, four-hands.

With Julia Hsu, he plays piano four-hands in New York City, Beacon, NY, Mount Kisco, NY, Orange, CA and Oxford and orchestral programs with the Sacramento Philharmonic and Berkshire and Longwood Symphonies. He tours to Europe with the Curtis Symphony Orchestra following a run-out concert in Philadelphia. He joins members of the New York Philharmonic in a performance of the Busch Piano Quintet at New York City’s Merkin Concert Hall at Kauffman Music Center in April.

Anna Polonsky is widely in demand as a soloist and chamber musician. She has appeared with the Moscow Virtuosi, the Buffalo Philharmonic, the Saint Paul Chamber Orchestra, the Columbus Symphony Orchestra, the Memphis Symphony, the Chamber Orchestra of Philadelphia, the St. Luke’s Chamber Ensemble, and many others. Ms. Polonsky has collaborated with the Guarneri, Orion, Daedalus, and Shanghai Quartets, and with such musicians as Mitsuko Uchida, Yo-Yo Ma, David Shifrin, Richard Goode, Emanuel Ax, Arnold Steinhardt, Peter Wiley, and Jaime Laredo. She has performed chamber music at festivals such as Marlboro, Chamber Music Northwest, Seattle, [email protected], Cartagena, Bard, and Caramoor, as well as at Bargemusic in New York City. Ms. Polonsky has given concerts in the Amsterdam Concertgebouw, the Vienna Konzerthaus, the Alice Tully Hall, and Carnegie Hall’s Stern, Weill, and Zankel Halls, and has toured extensively throughout the United States, Europe, and Asia. A frequent guest at the Chamber Music Society of Lincoln Center, she was a member of the Chamber Music Society Two during 2002-2004. In 2006 she took a part in the European Broadcasting Union’s project to record and broadcast all of Mozart’s keyboard sonatas, and in the spring of 2007 she performed a solo recital at Carnegie Hall’s Stern Auditorium to inaugurate the Emerson Quartet’s Perspectives Series. She is a recipient of a Borletti-Buitoni Trust Fellowship and the Andrew Wolf Chamber Music Award.  Anna Polonsky made her solo piano debut at the age of seven at the Special Central Music School in Moscow, Russia. She emigrated to the United States in 1990, and attended high school at the Interlochen Arts Academy in Michigan. She received her Bachelor of Music diploma from The Curtis Institute of Music under the tutelage of the renowned pianist Peter Serkin, and continued her studies with Jerome Lowenthal, earning her Master’s Degree from the Juilliard School. In addition to performing, she serves on the piano faculty of Vassar College, and in the summer at the Marlboro and Kneisel Hall chamber music festivals. With her husband Orion Weiss, she is a member of the Polonsky-Weiss Piano Duo.

About the Berkshire Symphony