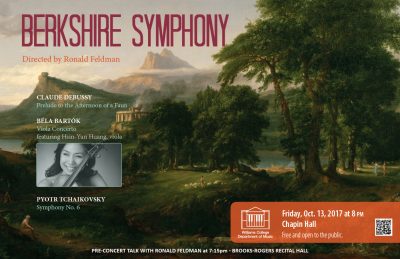 The Williams College Department of Music presents the Berkshire Symphony in concert on Friday, October 13, at 8 p.m. in Chapin Hall on the Williams College campus. There is a pre-concert talk with conductor Ronald Feldman at 7:15 p.m. in Brooks-Rogers Recital Hall, adjacent to the main venue. These events are free and open to the public.

This concert features Claude Debussy’s Prelude to the Afternoon of a Faun; Bela Bartók’s Viola Concerto featuring Hsin-Yun Huang, viola; and closes with a performance of Tchaikovsky’s magnificent Symphony No. 6.

About Hsin-Yun Huang
Hsin-Yun Huang has forged a career as one of the leading violists of her generation. She has been soloist with the Berlin Radio Orchestra, the Tokyo Philharmonic, Zagreb Soloists and the London Sinfonia, among many others. She also performs regularly at festivals, just a handful of which are Marlboro, Spoleto, Rome, Santa Fe among many others. She was a member of the Borromeo String Quartet from 1994 to 2000.

She is active in commissioning works for solo viola and chamber ensemble. Her 2012 recording, Viola Viola, for Bridge Records, included commissions from Shih-Hui Chen and Steven Mackey, and works by Elliott Carter, Poul Ruders, and George Benjamin. Upcoming recording projects include complete Solo Bach Violin Sonatas and Partitas on the Viola to be released in 2017.

A native of Taiwan, Ms. Huang first came to international attention as the gold medalist and youngest competitor in the 1988 Lionel Tertis International Viola Competition. She was educated at the Menuhin School in UK prior to received degrees from The Curtis Institute of Music and the Juilliard School. She now serves on the faculties of both schools and lives in New York City. 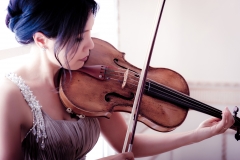