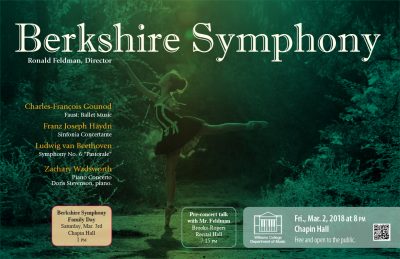 The Williams College Department of Music presents the Berkshire Symphony, conducted by Ronald Feldman, for a weekend of great music. The orchestra performs on Friday, March 2, at 8 p.m. in Chapin Hall on the Williams campus. There is a pre-concert talk with Mr. Feldman at 7:15 p.m. in Brooks-Rogers Recital Hall, adjacent to the venue. On Saturday, March 3, at 1 p.m., all are invited to Berkshire Symphony Family Day.

Friday evening’s concert of the Berkshire Symphony starts with Haydn, Sinfonia Concertante. Next, the Piano Concerto by music faculty member Zachary Wadsworth featuring soloist Doris Stevenson. In the second half of the program the orchestra performs music by Gounod, Faust: Ballet Music and Beethoven’s Symphony No. 6 “Pastorale.”

On Saturday, starting at 1pm, Ephs Out Loud, a student-led initiative designed to promote community engagement and collaboration through music, offers musical crafts, face-painting, and an instrument petting zoo. From 1:15-1:45 p.m. there is a workshop with the Williams College Choirs. At 2 p.m. in Chapin Hall the Berkshire Symphony joins the party with music and fun for everyone. All events are free and in the Bernhard Music Center.

Zachary Wadsworth’s compositions have been heard in venues around the world, from Washington’s Kennedy Center to Tokyo’s Takinogawa Hall, and have been performed by such ensembles as the choir of Westminster Abbey, the Yale Schola Cantorum, the Buffalo Philharmonic Orchestra, and the Atlanta Philharmonic Orchestra. As the 2012-2013 recipient of the Douglas Moore Fellowship for American Opera, Wadsworth was in residence at the Metropolitan Opera and the Santa Fe Opera. In 2014, he had his Carnegie Hall debut.

Winner of an international competition chaired by James MacMillan, Wadsworth’s anthem Out of the South Cometh the Whirlwind was performed at Westminster Abbey in the presence of Queen Elizabeth II. Other recent honors include a Charles Ives Scholarship from the American Academy of Arts and Letters, three Morton Gould Young Composer Awards from ASCAP, and first-prize recognition in competitions sponsored by the American Composers Forum, the King James Bible Trust, Long Leaf Opera, the Pacific Chorale, the Boston Choral Ensemble, and the Esoterics. Wadsworth’s music is widely broadcast and distributed, with recent publications by Novello, G. Schirmer, and E.C. Schirmer, and airings on NPR, BBC, and CBC.

Wadsworth earned graduate degrees from Cornell University (DMA) and Yale University (MM), and is an honors graduate of the Eastman School of Music (BM). Originally from Richmond, Virginia, Wadsworth (b. 1983) has previously taught at the Interlochen Center for the Arts and the University of Calgary in Alberta, Canada.

Doris Stevenson has won lavish praise from critics and public alike in performances around the world. She has soloed with the Boston Pops, played at Carnegie Hall and Alice Tully Hall in New York, the Kennedy Center in Washington D.C., Salle Pleyel in Paris, Sala de Musica Arango in Bogota, and Suntory Hall in Tokyo. Her acute sensitivity and musicianship have made her a sought-after partner with some of the leading lights in string playing. She has performed with Gregor Piatigorsky, Ruggiero Ricci and Paul Tortelier, great players of the past. Early in her career she was invited by Heifetz and Piatigorsky to perform with them in their chamber concerts. She was pianist for the cello master classes of Piatigorsky, who described her as “an artist of the highest order.” The list of distinguished artists she has performed with includes cellists Andre Navarra, Leslie Parnas and Gary Hoffman, violinists Charles Castleman, Stephanie Chase and Jaime Laredo, violists Walter Trampler and Paul Neubauer and singers Kaaren Erickson and Catherine Malfitano. She has participated in many chamber music festivals and has performed in 48 of the 50 states. She is a founding member of the Sitka Summer Music Festival in Alaska and has toured throughout that state, playing in many remote Native Alaskan communities. She recently performed with cellist Zuill Bailey at the Phillips Gallery in Washington D.C. and at Bargemusic in New York. She plays a score of outreach concerts each season for the Piatigorsky Foundation in schools, libraries, prisons, and remote communities, bringing live classical music with commentary to people who wouldn’t otherwise hear it.

Doris Stevenson is committed to performing new music. In the last three years she has played in concert the works of twenty living composers. She was the first woman to perform Frederick Rzewski’s masterpiece, De Profundis for speaking pianist, which she brought to New York City to perform at a Williams in New York concert. Her many recordings include six major works by David Kechley and two by Ileana Velazquez Perez, the Saint Saens violin sonatas with Andres Cardenes, the complete Mendelssohn cello works with Jeffrey Solow, and the Brahms Sonatas with cellist Nathaniel Rosen. A CD of Stravinsky rarities with violinist Mark Peskanov received a Grammy nomination. Miss Stevenson taught for ten years at the University of Southern California and has been Lyell B. Clay Artist in Residence at Williams College since 1987.

About the Berkshire Symphony