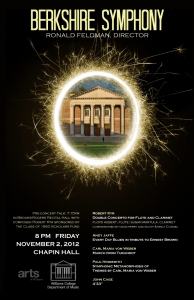 The Williams College Department of Music presents the Berkshire Symphony in concert on Friday, Nov. 2 at 8 p.m. in Chapin Hall on the Williams College campus. Sponsored by the Class of 1960 Scholars Fund, there is also a pre-concert talk with composer Robert Kyr in Brooks-Rogers Recital Hall, adjacent to the lobby of Chapin Hall. These events are free and open to the public.

The Berkshire Symphony plans to fill the hall with sound – and with silence. This year also marks the centenary of one of the 20th century’s most influential composers, John Cage. His piece, 4’33” is one of his best known and controversial. It instructs the performer not to play for four minutes and thirty-three seconds. The piece has one thing in common with any great musical gesture: it provokes thought in every person who experiences it, focusing on an aspect of performance that few listeners consider — that is, the role of silence in a performance.

The orchestra also presents Artist Associates Susan Martula, clarinet, and Floyd Hebert, flute, in the Double Concerto for Flute and Clarinet by Robert Kyr. The composer has been featured before by the Berkshire Symphony and enjoys the reputation as one of the most prolific and lyrical composers of his generation. In his reflections about the piece, Robert Kyr states, “The double concerto is a musical embodiment of my experience as a mediator, who leads opposing individuals (or groups) through a process of reconciliation that guides them toward respectful dialogue, understanding, and true collaboration. The piece is commissioned in honor of Floyd Hebert and Susan Martula by Scott and Emily Congel, and David Perry.

Every Day Blues is a tribute to Prof. Ernest D. Brown by his colleague, Andy Jaffe, director of jazz studies and a well-known performer, arranger, composer, and author of seminal studies of jazz music theory. Every Day Blues blends African, American, and European traditions. Mr. Jaffe based his composition on the notes and initials E, D, and B and translates his jazz sensibility into an orchestral setting.

Sponsored by the Class of 1960 Scholars Fund, there is also a pre-concert talk with composer Robert Kyr at 7:15pm in Brooks-Rogers Recital Hall, adjacent to the lobby of Chapin Hall. These events are free and open to the public.