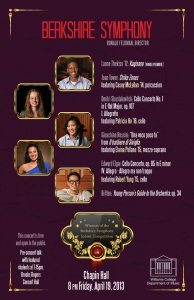 The Williams College Department of Music presents the Berkshire Symphony in concert on Friday, April 19, at 8 p.m. in Chapin Hall. There is a pre-concert talk with conductor Ronald Feldman and student soloists before the concert at 7:15 p.m. in Brooks-Rogers Recital Hall, adjacent to the main venue. Both of these events are free and open to the public.

This gala concert in magnificent Chapin Hall is the final performance of season for the Berkshire Symphony and features some of Williams’ finest music students. The orchestra premieres a composition thesis work and features winners of the Berkshire Symphony Student Soloist Competition. The soloists were selected in February by a panel of judges during the annual competition, which is open to Williams music students who have been recommended by their teachers to audition.

Percussionist Casey McLellan ’14 leads off the concert with a performance of Strike Zones by Joan Tower. Ms. McLellan is a music major from Miami and co-director of the Williams Student Symphony.

The symphony is playing a world premiere by composer Laone Thesiko ’12 titled Kagisano, a word in the Setswana language for reconciliation. Mr. Thesiko graduated from Williams in June and is preparing to enter the Master of Modern American Music program for piano at the Longy School of Music in the fall.

Cellist Robert Yang ’15 performs a movement from Edward Elgar’s Cello Concerto, opus 85 in E minor. Mr. Yang comes from a family of musicians and he is a native of Nashville, Tennessee.

Patricia Ho ’16 is a student of cellist Nathanial Parke and is from Newton, Mass. She performs a movement from Cello Concerto No. 1 in E-flat Major, op.107 by Dmitri Shostakovich.

Following these solo pieces, director Ronald Feldman leads the Berkshire Symphony in a performance of Benjamin Britten’s popular work, The Young Person’s Guide to the Orchestra.

Benjamin Britten: The Young Person’s Guide to the Orchestra, op. 34

[Pre-Concert talk at 7:15pm with performers and Director Ronald Feldman]