Berkshire Symphony: The Rite of Spring 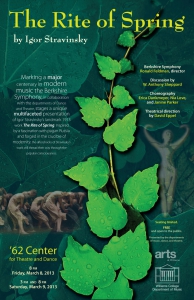 The Berkshire Symphony, in collaboration with the departments of Music, Dance, and Theatre at Williams College, will stage a multifaceted presentation of Igor Stravinsky’s The Rite of Spring to celebrate the centennial of this groundbreaking work. The performances will take place at 8 p.m. on March 8, and 3 p.m. and 8 p.m. on March 9 in the MainStage of the ’62 Center for Theatre and Dance. The event is free and open to the public. No tickets or reservations are necessary.

This exploration of The Rite of Spring will be in two parts. The first part features a lecture on the history of The Rite of Spring with live dance demonstrations by CoDa (Williams College’s Contemporary Dance Ensemble), piano performances, and video clips.  The May 29, 1913, performance of The Rite of Spring is one of the most legendary premieres in European music and dance history. Audience members rioted, which caused people to talk about the event long after it took place. The ballet’s depiction of paganism, particularly imagined ancient rituals with human sacrifice, and primitive-looking costumes and choreography were revolutionary. The production was met with extreme audience hostility and critical controversy. The dance excerpts are choreographed by acting Chair and artist-in-residence Erica Dankmeyer and visiting artists Nia Love and Janine Parker. Professor of Music W. Anthony Sheppard will speak on why the piece caused a small riot at its premiere and why it is still so powerful today.

In the second part, Director Ronald Feldman will conduct the Berkshire Symphony in a full performance of The Rite of Spring. Stravinsky’s score, which features sections of aggressive and energetic music as well as sections of delicate mystery, became one of the most influential works in the history of European music. The score launched Stravinsky’s career, and many consider Stravinsky to be the most important European composer of the 20th century. This part of the evening includes a theatrical element directed by David Eppel, Chair and professor of theatre.

The event is sponsored by the departments of Music, Theatre, and Dance with support from Arts at Williams.