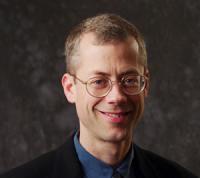 Scott Metcalfe, the director of the Boston-based Blue Heron Renaissance Choir, will participate in an informal and wide-ranging discussion about the particular challenges and pleasures of performing 15th-century French song, focusing on performance practice issues such as instrumentation, music and text relationships, and vocal production.

Metcalfe is a specialist in music between 1400 and 1750 whose career as a violinist and conductor has taken him all over North America and Europe. He directs the vocal ensemble Blue Heron and has been invited to serve as guest director by Emmanuel Music (Boston), Monadnock Music (New Hamsphire), the Tudor Choir and Seattle Baroque, Pacific Baroque Orchestra (Vancouver, BC), and the Dryden Ensemble (Princeton, NJ), in works by Monteverdi, Buxtehude, Handel, Bach, and others. In January 2010 he will lead the Green Mountain Project in an all-star 400th anniversary performance of Monteverdi’s 1610 Vespers in New York City (www.greenmountainvespers.com). Metcalfe is concertmaster of Trinity Consort in Portland, Oregon (dir. Eric Milnes), a member of Les Délices (dir. Debra Nagy), based in Cleveland, and an active participant in Montreal’s early music scene, working with Arion, Montreal Baroque, Les Voix baroques, and other groups. He was a founding member of the 17th-century ensemble La Luna and of the Renaissance violin band The King’s Noyse, and from 1996 through 2007 he conducted the Renaissance choir Convivium Musicum. In recent years he has also taken up the medieval fiddle. Besides playing and directing, Metcalfe keeps busy writing, teaching, translating, and editing. He is preparing a new complete edition of the songs of Gilles Binchois in collaboration with Sean Gallagher of Harvard University, and was a lecturer in choral repertoire and performance practice at Boston University in 2006-07 and 2008-09. Metcalfe received a bachelor’s degree in 1985 from Brown University, where he majored in biology, and in 2005 completed a master’s degree in historical performance practice at Harvard.