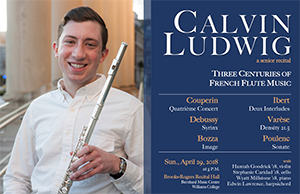 Winner of the 2018 Berkshire Symphony Soloist Competition and praised for his “exceptional artistry and full, supported tone across all registers,” 22-year-old Calvin Ludwig ‘18 is a fourth-year student flutist at Williams College. Originally from Poughkeepsie, NY, Calvin studies under New England Conservatory flutist Jacqueline DeVoe and is a flutist/piccoloist in the Berkshire Symphony under the baton of Ronald Feldman. Calvin is principal flute of the Chamber Orchestra of Williams and has performed regularly with the Williams Opera Workshop, I/O Fest, and Williams Chamber Players. A double major with Honors in biochemistry and mathematics, Calvin’s academic interests include the use of computational analytics in the study of biomedicine. Before his intended enrollment in medical school, Calvin will study hematopoietic developmental biology as a research associate in the laboratory of Professor Leonard Zon M.D. at Harvard Medical School. Calvin extends his deepest thanks to Mrs. DeVoe, his family, his friends, and the Williams College Department of Music for their support and facilitation of his and others’ extraordinary music-making at Williams and beyond.