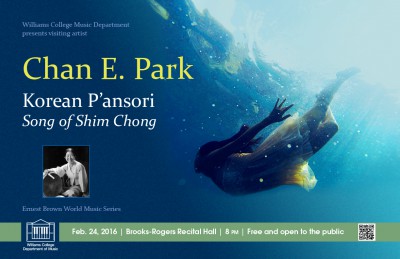 The Williams College Department of Music presents singer Chan E. Park on Wednesday, Feb. 24 at 8 p.m. in Brooks-Rogers Recital Hall on the college campus. The concert is free and open to the public.

Chan E. Park presents her bilingual adaptation of an excerpt from the Song of Shim Chong, along with slides that include English translation of the lyrics. The Pansori Song of Shim Chong is one of the five classical pansori repertoires preserved as Korea’s Intangible Cultural Asset (1963), and proclaimed as UNESCO’s Masterpiece of the Oral and Intangible Heritage of Humanity (2003).

The filial daughter Shim Chong is one of the most endearing characters in Korean storytelling. Her mother dies when she was a few days old, and her blind father raises her by begging. She grows up to be a beautiful and loving girl. At fifteen, she sells herself to a group of merchant sailors as human sacrifice to the Dragon King, ruler of the sea, in order to procure the three hundred bags of rice her father has promised to the temple in return for prayers for the recovery of his sight. Shim Chong follows the sailors to the sea and drowns. Her devoted heart moves heaven, and she is sent back to the world to live the rest of her life as empress.

She misses her father very much. In order to help his queen find her father, the emperor holds a one hundred day royal banquet for all the blind men of the country. On the last day, Blindman Shim arrives at the banquet. The sheer amazement of being reunited with his daughter causes Blindman Shim to regain his sight.

Chan E. Park received her PhD from University of Hawaii, and is currently professor of Korean language, literature, and performance studies at The Ohio State University. Her specialization is research and performance of p’ansori, Korean story-singing, its performance in transnational context in particular, related oral narrative/lyrical/dramatic traditions, and their places in the shaping of modern Korean drama. She has published extensively on the theory and practice of oral narratology and its interdisciplinary connection with arts and humanities as a whole, including her recent monograph, Voices from the Straw Mat: Toward an Ethnography of Korean Story Singing (University of Hawaii Press, 2003). Park has given numerous lectures, seminars, workshops and performances of pansori locally, nationally, and internationally.