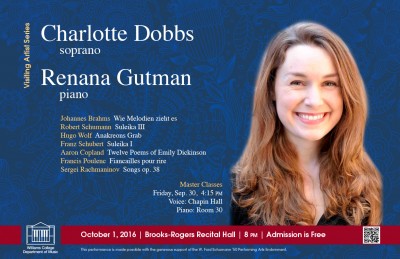 The Williams College Department of Music presents Charlotte Dobbs, soprano, along with pianist Renana Gutman on Saturday, October 1 at 8 p.m. in Brooks-Rogers Recital Hall on the Williams College campus. There is also a voice master class featuring talented Williams student singers on Friday, Sept. 30 at 4:15 p.m. in the Brooks-Rogers Recital Hall. A piano master class takes place on the same day at 3:15 p.m. in room 30 of the Bernhard Music Center. These free events are open to the public.

Ms. Dobbs and Ms. Gutman present an ambitious and pleasingly varied program. The beginning selections highlight German art song tradition, with selections by Brahms, Schumann, Schubert, and Wolf. The evening also offers a chance to get acquainted, or reacquainted, with a work that combines the genius of two American icons: Aaron Copland’s Twelve Poems of Emily Dickinson. The second half includes a song cycle by Francis Poulenc and a set of Russian songs by Rachmaninov.

About Charlotte Dobbs, soprano
Praised in Opera Now for her “angelic lyric soprano voice,” Charlotte Dobbs brings luminous sound and incisive musicianship to a broad repertoire that encompasses Bach, Mozart, and the bel canto masters, as well as the second Viennese school and contemporary composers.

Charlotte made her New York Philharmonic debut in a new song cycle by the Swiss composer Michael Jarrell, and debuted with the Philadelphia Orchestra in a concert of works of Mozart and the Alabama Symphony Orchestra in Handel’s Messiah. She sang with the Los Angeles Chamber Orchestra for Bach’s Magnificat under Jeffrey Kahane. She also was featured in recital at Copland House, Caramoor and with the Claring Chamber Players for Faure’s La Bonne Chanson. An avid performer of new music, Charlotte has been featured by the MATA Festival, Beth Morrison Productions, and Collage New Music in Boston.

Charlotte sang with the New York City Opera in VOX, a concert performance of new operas, and covered Governess in their production of The Turn of the Screw. Charlotte made her European debut as Corinna in Il viaggio a Reims at the Rossini Opera Festival in Pesaro, and returned to Italy to sing Rosina in Il barbiere di Sivigliaunder the auspices of the Fondazione Pergolesi Spontini and Teatro Aligheri in the theaters of Jesi, Fermo, and Ravenna. With the Chicago Opera Theater, she sang Servilia in La clemenza di Tito with Jane Glover in a new production of Christopher Alden. Under the baton of Lorin Maazel, she appeared as Governess in the Chateauville Foundation’s production of The Turn of the Screw. Other recent operatic credits include Amina in La Sonnambula, Donna Elvira in Don Giovanni, the title role in Tchaikovsky’s Iolanta, Nuria in Ainadamar, and Countess in Le nozze di Figaro with the Curtis Opera Theater, as well as the title role in Iphigenie en Aulide, Elettra in Idomeneo, and Juno in La Calisto at Juilliard. Charlotte also joined renowned theater group The Civilians for their production Paris Commune at Arts Emerson and the Brooklyn Academy of Music.

She appeared in recital with Mitsuko Uchida at the Marlboro Music Festival, performing Schoenberg’s Book of the Hanging Gardens. Also at Marlboro, she gave her first performance of Schoenberg’s Second String Quartet, which was reprised with the Saratoga Chamber Players. She has been featured in three programs with the New York Festival of Song, most recently “The Sweetest Path” at Caramoor and Merkin Hall. Miss Dobbs made her Kimmel Center and Carnegie Hall debuts in Nielsen’s Third Symphony with the Curtis Symphony Orchestra under the baton of Alan Gilbert.

Born in Massachusetts, she has received an M.M. from both Juilliard and Curtis and a B.A. from Yale, where she majored in English and Music.

Renana was one of four young pianists selected by the renowned Leon Fleisher to participate in his workshop on Beethoven piano sonatas hosted by Carnegie Hall, where she presented performances of “Hammerklavier” and “Appassionata” to critical acclaim. Her recording of Chopin etudes op.25 will be released in 2016.

Renana spent summers at the Marlboro and Ravinia Music Festivals where she collaborated with Richard Goode, Mitsuko Uchida, members of the Guarneri quartet and clarinetist Anthony McGill. She toured with “Musicians from Marlboro” in series like People’s Symphony Concerts (NY), Gardener Museum (Boston) and Freer Gallery (Washington).

High in demand as a chamber musician, Renana serves as the staff collaborative pianist of Steans Institute at Ravinia Festival, where she performs chamber music and lieder extensively.  Her regular duo partners include violinists Alexi Kenney, InMo Yang, Yoojin Jang and Tessa Lark. Recently, she premiered a commissioned piece by composer Paul Schoenfield alongside violinist Miriam Fried. She has been touring with “Echoes of Hope” ensemble, which is dedicated to performing obscure pieces by Jewish composers who perished in the Holocaust.

From 2008-2010 Renana had been on the piano faculty of the Yehudi Menuhin Music School in the UK, as an assistant of prof. Marcel Baudet. She currently teaches at 92nd Street Y, and Bard College Preparatory in NY.

A native of Israel, she started piano playing at the age of six.  Soon after, she garnered multiple awards and honors, and became a recipient of America Israel Cultural Foundation Scholarship with distinction from 1992-2004, and later on of Jewish Foundation for the Education of Women Scholarship.

Her most influential teachers were pianists Natasha Tadson and Victor Derevianko in Israel, and Richard Goode at Mannes College of Music in New York where she completed her Bachelor and Master of Music degrees. Her musicianship teacher was the established Israeli composer Arie Shapira.

Renana became an American citizen in 2015 and makes her home in NYC.

Charlotte Dobbs and Renana Gutman are presented by the Williams College Department of Music with the generous support of the W. Ford Schumann ’50 Performing Arts Endowment.