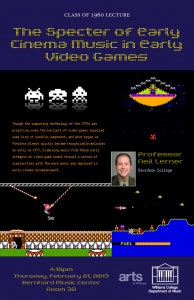 The Specter of Early Cinema Music in Early Video Games

Professor Neil Lerner of Davidson College gives a lecture titled The Specter of Early Cinema Music in Early Video Games on Thursday, Feb. 21, at 4:15 p.m. in Bernhard Music Center Room 30 on the Williams College campus. This lecture is sponsored by the Class of 1960 Scholars Fund and is free and open to the public.

Though the computing technology of the 1970s was primitive, even the earliest of video games supplied some kind of audible component, and what began as formless bleeps quickly became recognizable melodies as early as 1977. Examining music from these early attempts at video game sound reveals a series of similarities with the ways music was deployed in early cinema accompaniment. Examples will include clips from Circus (1977), Space Invaders (1978), Phoenix (1980), Scramble (1981), and Donkey Kong (1982).

Musicologist Neil Lerner teaches at Davidson College in North Carolina. He has published on a wide variety of topics relating to music in screen media, including music in film, television, and video games. He co-edited Sounding Off: Theorizing Disability in Music with Joseph Straus and edited Music in the Horror Film: Listening to Fear. Lerner currently edits the book series Music and Screen Media (Routledge) and the journal American Music (University of Illinois Press).