Class of ’60 Lecture with Steven Walsh
"The Russian Nationalists: a 'handful', certainly, but how 'mighty'?" 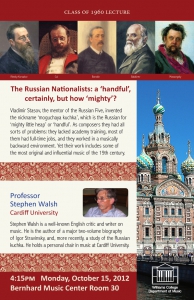 Professor Stephen Walsh of Cardiff University gives a lecture titled The Russian Nationalists: a ‘handful’, certainly, but how ‘mighty’? on Monday, Oct. 15, at 4:15 p.m. in Bernhard Music Center Room 30 on the Williams College campus. This lecture is sponsored by the Class of 1960 Scholars Fund and is free and open to the public.

Vladimir Stasov, the mentor of the Russian Five, invented the nickname ‘moguchaya kuchka’, which is the Russian for ‘mighty little heap’ or ‘handful’. As composers they had all sorts of problems: they lacked academy training, most of them had full-time jobs, and they worked in a musically backward environment. Yet their work includes some of the most original and influential music of the 19th century. Stephen Walsh is a well-known critic and writer on music. He is the author of a major two-volume biography of Igor Stravinsky, and, more recently, a study of the Russian kuchka (in press). He holds a personal chair in music at Cardiff University.