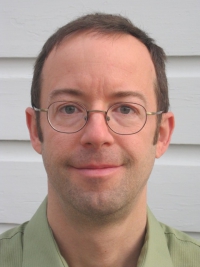 In conjunction with I/O Fest 2017 Prof. Ed Gollin gives a lecture that offers insight into one of the composers, Tom Johnson, and one of his pieces, Nine Bells.

The works of composer Tom Johnson (b. 1939) often explore the interaction of mathematical design and musical sound. A student of Morton Feldman, Johnson was active in the New York new music scene in the 1960s and 70s, before moving to Paris in 1983. The talk will explore Johnson’s music in general, but will focus in particular on Nine Bells (1979), one of Johnson’s most celebrated compositions, and one which will be performed in its entirety at I/O Fest. The piece is a minimalist work that requires the performer to walk specific pathways (clover leaves, circles, stars) through a 3×3 matrix of nine pitched bells, striking bells according particular cyclical rhythmic patterns. The pealing patterns of the bells are often transformed in logical ways over the course of a movement (e.g. by adding or subtracting or tones, or by shifting phase relative to the performer’s location in the matrix). The work thus makes audible and visible the melodic permutations latent in each pathway. The talk will give a preview of the work, examine the processes that underlie specific movements, and discuss some of the performance strategies used in a work that places unusual mental and physical demands on the performer.