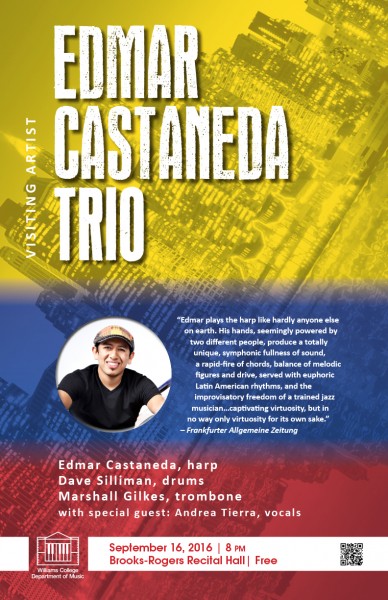 Edmar Castaneda was born in 1978, in the city of Bogotá, Colombia. Since his move to the United States in 1994, Edmar has taken New York and the world stage by storm with the sheer force of his virtuosity and command of the harp—revolutionizing the way audiences and critics consider an instrument commonly relegated to the “unusual category.” He is a master at realizing beautiful complexities of time, while skillfully drawing out lush colors and dynamic spirit.

Even now, on stages across the globe, one notes how Edmar’s body seemingly engulfs his Colombian harp as he crafts almost unbelievable feats of cross-rhythms, layered with chordal nuances rivaling the efforts of any flamenco guitarist. Edmar’s latest recording Double Portion, (which features Miguel Zenon, Cuban pianist Gonzalo Rubalcaba & Hamilton de Holanda on mandolina) has caught the attention of reviewers and his legion of fans. Rob Young of Urban Flux Magazine says of the recording, “Edmar Castaneda’s caliber redefines depth, skill and emotion.”

In addition to his acclaimed performing career as an instrumentalist, which has included features at D’Rivera’s Carnegie Hall tribute, Jazz at Lincoln Center, The John F. Kennedy Center for the Performing Arts, the Tanglewood Jazz Festival, and the 10th annual World Harp Congress, he has also played with Wynton Marsalis and the Jazz at Lincoln Center Orchestra, John Scofield, Marcos Miller, John Patitucci, Chico O’Farrill‘s Afro-Cuban Jazz Big Band and Edmar Castaneda has gained recognition as a composer.

Joining Edmar Castaneda is a trombonist of fascinating versatility and virtuosity. Marshall Gilkes is a musical chameleon, able to alter his sound to fit into whatever situation he finds himself. He has made his mark on such diverse contexts as the lush impressionism of the Maria Schneider Orchestra; the exotic chamber jazz of Colombian harpist Edmar Castaneda; or the fiery combustion of New York’s thriving Latin music scene.

Gilkes has four albums under his own name. His latest is a a stunning set of compositions for the WDR Big Band (Cologne, Germany) named for its home base, Köln. His albums have also garnered him accolades from critics, audiences, and peers alike. In 2003 Gilkes was a finalist in the prestigious Thelonious Monk International Jazz Competition, and has been voted a Rising Star on multiple occasions in the DownBeat Critics Poll. Bill Milkowski of JazzTimes has called Gilkes “compelling, harmonically intriguing and ferociously swinging,” while bandleader Maria Schneider refers to him as “one of those musicians who continually just drops my jaw and leaves me shaking my head in disbelief.”

Drummer and percussionist, David Silliman is a versatile performer who has appeared with song stylists such as Mariah Carey, Cassandra Wilson, and Blossom Dearie. David Silliman’s exciting rhythmic energies add color and mood to any musical performance. With over 20 years of experience, his performances have taken him to concerts and festivals in Italy, Vienna, Berlin, the North Sea, Monterey, Uruguay and Lithuania.

Hailing from Medellin, Colombia, Andrea Tierra blends Latin American rhythms with jazz and her poetry to create a one-of-a-kind musical brew. Her songs focus on the progressive, challenging injustices, to love, to life, and to the land (“Tierra” means “earth” in Spanish.) With a rare contralto voice that pierces the heart, Andrea Tierra’s transcends time. With her own group she explores a world of poetry that moves through such Latin American rhythms as cumbia, bambuco and joropo (Colombia), zamba (Argentina), lando (Peru) bossa nova and samba (Brazil), flamenco (Spain), mixed with the unique New York style. In her first CD Melodía Verde (2008) she takes this sensibility on a journey around Latin America, putting the music through the lens of her life and experience.

Andrea Tierra released her first book of poetry, Canto (2006), in which she develops a new concept of poetry that mixes her Colombian roots with the US culture and her own experiences as immigrant and New York resident.

Among the many stages she has performed upon, her appearance at the annual Colombian Heritage Festival held at Madison Square Garden proved her an audience favorite. Andrea Tierra, has performed at the New Orleans Jazz Festival, Bayside Festival of Miami, Latino Festival of New York, Lowell Folk Festival; jazz festivals in Colombia, Uruguay, and Panama, and in world-renowned music venues such as Satalla, Jazz Gallery, Zinc Bar, Sweet Rhythms, Jazz Standard, Dizzy’s Club Coca-Cola, among others. A performance art legacy (she was a member of her father’s traveling theater company since childhood) Andrea Tierra delivers an intensity in music that could be described in words, but is much better experienced.