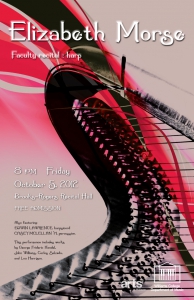 The Williams College Department of Music presents Elizabeth Morse in a solo harp recital on Friday, Oct. 5 at 8 p.m., in Brooks-Rogers Recital Hall on the college campus. The event is free and open to the public

Elizabeth Morse offers a musical program contrasting what we know of the harp with what we have yet to find out. This is a rare chance to explore the fascinating sound of the harp in a live setting by a true master of the instrument.

Together with harpsichordist Edwin Lawrence, Ms. Morse performs the Concerto in B flat by George Fridric Handel. In a  truely unique performance, the musicians add their own ornamentation to Handel’s score. Collaborating with percussionist Casey McLellan ‘14,  Ms. Morse presents three pieces by American composer Lou Harrision (1917-2003): For Bill and Me, Avalokiteshvara, and Jahla. The contemporary American composer John Williams, though known for his film scores, has made significant contributions to the solo repertoire of various instruments, including the harp: “Lanes of Limerick” from the film Angela’s Ashes is one such contribution. Finally Ms. Morse presents Suite of Eight Dances by Carlos Salzedo, including Gavotte, Minuet, Polka, Siciliana, Bolero, Seguidilla, Tango, and Rumba.

Elizabeth Morse, principal harpist of the Berkshire Symphony and Artist Associate in Harp at Williams College, has been active throughout New England as a soloist, recitalist, chamber musician and pedagogue. She is formerly principal harpist of the Rhode Island Philharmonic and assistant director of the Boston University Tanglewood Institute Harp Seminar. She has been a judge at the Schubert International Competition in Ovada, Italy and for the Harvard Musical Association Foote Award. Ms. Morse is a graduate of Boston University School for the Arts where she studied with Lucile Lawrence. She was the recipient of the Oliver Ditson Fund Award, the Crescendo Club Scholarship, and the Arlington Symphony Concerto Competition. Further studies were at Boston University Tanglewood Institute and with Alice Chalifoux at the Salzedo Harp Colony.

At the age of 17 she gave her Boston debut at Jordan Hall with Gunther Schuller conducting Mozart’s Concerto for Flute and Harp. At the 1973 Music Educators’ National Conference, representing the American Harp Society, she premiered the Concertino for Harp by Ernst von Dohnanyi. An advocate of contemporary music, she has premiered and commissioned works of dozens of composers including Peter Child, Augusta Read Thomas and Donald Crockett in concert with the new music groups such as Extension Works, Williams College Group for 20th Century Music, and Alea III.