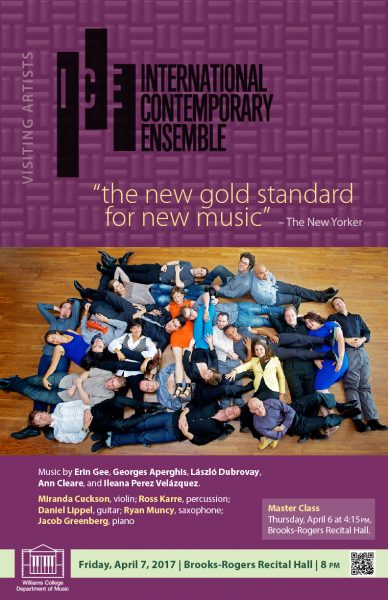 The program offers a platform for exploring instrumental identities and asks a question: can a composer discover sounds that truly divorce the sound’s source from its customary associations?

Moving toward an answer ICE presents a program of contrasts, framed by six musical touchstones, interspersed through the program. “Sei Duo,” László Dubrovay’s six short pieces for violin and percussion, provide this reference with familiar violin and keyboard percussion playing. These six movements recall music of the folk fiddle and the romantic violin soloist, placing the other works in the program in sharp relief. Violinist Miranda Cuckson and percussionist Ross Karre rely on the traditions of their practice to guide their interpretation of Dubrovay.

The International Contemporary Ensemble (ICE) is an artist collective committed to transforming the way music is created and experienced. As performer, curator, and educator, ICE explores how new music intersects with communities across the world. The ensemble’s 35 members are featured as soloists, chamber musicians, commissioners, and collaborators with the foremost musical artists of our time. Works by emerging composers have anchored

ICE’s programming since its founding in 2001, and the group’s recordings and digital platforms highlight the many voices that weave music’s present.

A recipient of the American Music Center’s Trailblazer Award and the Chamber Music America/ASCAP Award for Adventurous Programming, ICE was also named the 2014 Musical America Ensemble of the Year. The group currently serves as artists-in-residence at Lincoln Center for the Performing Arts’ Mostly Mozart Festival, and previously led a five-year residency at the Museum of Contemporary Art Chicago. ICE has been featured at the Ojai Music Festival since 2015, and has appeared at festivals abroad such as Acht Brücken Cologne and Musica nova Helsinki. Other recent performance stages include the Park Avenue Armory, The Stone, ice floes at Greenland’s Diskotek Sessions, and boats on the Amazon River.

New initiatives include OpenICE, made possible with lead funding from The Andrew W. Mellon Foundation, which offers free concerts and related programming wherever ICE performs, and enables a working process with composers to unfold in public settings. DigitICE catalogues the ensemble’s performances in a free online streaming video library. ICE’s First Page program is a commissioning consortium that fosters close collaborations between performers, composers, and listeners as new music is developed. EntICE, a side-by-side youth program, places ICE musicians within youth orchestras as they premiere new commissioned works together. Inaugural EntICE partners include Youth Orchestra Los Angeles and The People’s Music School in Chicago. Yamaha Artist Services New York is the exclusive piano provider for ICE.