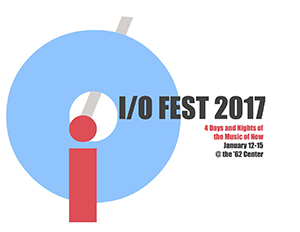 Presented by the Williams College Department of Music

4 Days and Nights of the Music of Now

All events are FREE and open to the public

– between concert reception and conversation with the artists

Anthony Braxton, and Charles Mingus, and meditations by Pauline Oliveros.

live in their own visceral and imaginary sound worlds. Featuring genre defying music by Taylor

instruments. Presented by I/O Fest and Ephs Out Loud.

2:30 PM OUT OF THE BOX: Drumming – The Clark, Conforti Pavilion

I/O Fest is the Williams College Department of Music’s annual immersion in the music of today. Over the course of four days and nights students, faculty, guest performers, and audiences delve deeply into new and adventurous music from around the world and down the street. Performances take full advantage of the ’62 Center for Theatre & Dance, making use of its technical capabilities and unconventional spaces. Featuring guest ensemble TAK, and performances by the I/O Ensemble, IOTA, and many others, I/O invites listeners to explore the music of now.

TAK is a quintet that delivers energetic and virtuosic performances of contemporary classical music. Described as “stellar” (Oneirics), and full of “restless strands of ever shifting color and vigor” (Feast of Music), TAK concerts are consistently dynamic and engaging. The group frequently collaborates with video artists, installation artists, and experimental theater companies to create immersive concert experiences on a multi-media level. TAK has had the pleasure of working with esteemed composers Mario Diaz de Leon, Lewis Nielson, Tyshawn Sorey, Sam Pluta, Ashkan Behzadi, Natacha Diels, David Bird, and Taylor Brook, among many others.

TAK has performed throughout New York City in spaces such as Roulette, New Amsterdam Records Headquarters, DiMenna Center for Classical Music, and Issue Project Room. In recent seasons, they have been invited to perform in collaboration with the American Composers Alliance, Innovations en concert (Montreal), the Queens New Music Festival (Queens, NY), and the Public Theater (NYC); they have held artist residencies at Avaloch Farm (New Hampshire) and Mount Tremper Arts (New York). TAK is dedicated to working with young composers, and has collaborated with a number of university composition programs to produce concerts of new commissions. Among these institutions are the Oberlin Modern Music Guild, the graduate composers of the “First Performance” student organization at New York University, and both the graduate and undergraduate composers of Columbia University for their Columbia Composers Concerts.