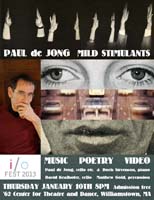 Composer, cellist, and audio scavenger Paul de Jong presents a first peek into his forthcoming solo show Mild Stimulants, featuring recent compositions and several premieres. De Jong performs on cello and arpeggione, manipulating live loops, spoken word, and his signature samples, which are mixed with video collages. You will hear Bar Hopping for two cellos; pre-recorded sound and video, co-composed with Joan Jeanrenaud for the Getty Foundation’s K-PST festival; and a set of pieces commissioned by the Poetry Foundation for Poetry Magazine’s 2012 centennial. Video oddities, found text, and solo-improvisations of surprise hits and manipulated near-misses will either balance the experience or lead to sensory disaster. But then again, de Jong likes to remind you that the world did not end on 12/21, and this show will only last for an hour or so.