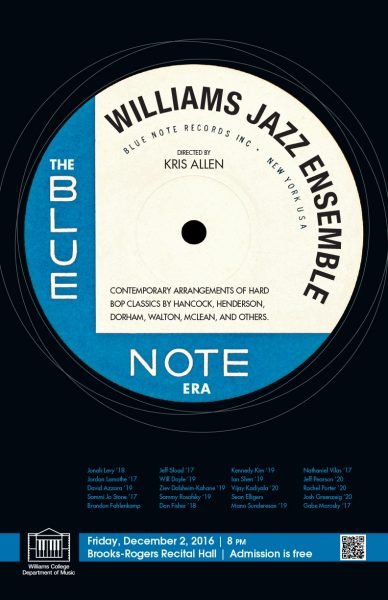 The Williams College Department of Music presents the Williams Jazz Ensemble directed by Kris Allen in Brooks-Rogers Recital Hall at 8 p.m. on Friday, Dec. 2. This free event is open to the public.

In the history of jazz, the term “Blue Note” refers not only to a record label, a jazz club or a flatted chord tone, but also to a rich era of jazz composition and performance. The decade between 1955 and 1965 saw a wealth of artists who were able to marry the rhythmic and harmonic complexities of bebop with clear references to jazz’s roots in blues and gospel, as well as to the musical languages of Latin America, Africa and the Far East. “Hardbop” music as it came to be known also represented a new pinnacle of small group arranging and ensemble playing. In its fall concert the Williams Jazz Ensemble offers a concert titled “The Blue Note Era.” The program explores contemporary big band arrangements of hard bop classics by Hancock, Henderson, Dorham, Walton, McLean and others. Arrangements by Bob Mintzer, Michael Phillp Mossman and WJE director Kris Allen among others.