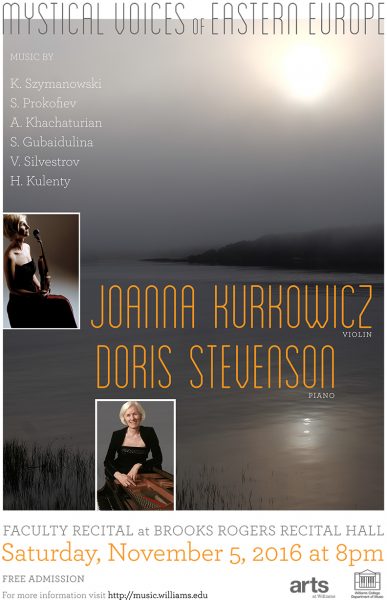 The Williams College Department of Music presents violinist Joanna Kurkowicz together with pianist Doris Stevenson on Saturday, Nov. 5 at 8 p.m. in Brooks-Rogers Recital Hall. This free event is open to the public.

In a concert titled Mystical Voices of Eastern Europe, Joanna Kurkowicz and Doris Stevenson champion undiscovered gems of violin repertoire. They present a program inspired by ranges of emotion – from reflection, to mystery, to sadness and lamentation, to ecstatic virtuosity and passion. Starting with the soulful Adagio from the opera Gayane for solo violin by Khachaturian, and ending with Prokofiev’s Sonata No. 2 in D Major, the program deepens to include works by lesser known, but no less musically significant composers such as Kulenty (b. 1961) Still Life with a Violin; Barkauskas (b. 1931) Partita; Gubaidulina (b. 1931) Dancer on the Tightrope for violin and piano; Szymanowski (1882 – 1937) Notturna e Tarantella for violin and piano; Silvestrov (b. 1937) Postludium for solo violin; and Auerbach (b. 1973) T’filah (Prayer) for solo violin.

About Joanna Kurkowicz
Praised in Gramophone magazine for “disciplined virtuosity,” violinist Joanna Kurkowicz enjoys an active and versatile career as an award-winning soloist, recitalist, chamber musician and concertmistress. She has performed on many of the great concert stages of the world, including Weill Recital Hall at Carnegie Hall, Jordan Hall, Boston and the Grosse Saal, Salzburg, and has appeared as a soloist with the New Zealand Symphony Orchestra, Metamorphosen Chamber Orchestra, the Jefferson Symphony,

the San Luis Obispo Symphony, the New England String Ensemble, the Berkshire Symphony, the Poznan Philharmonic, the Polish National Radio Orchestra in Katowice and Warsaw, and others. She has received awards from the Samuel Chester, Presser, Saint Botolph, Kosciuszko, and Olevsky Foundations, the Harvard Musical Association, the Irving McKlein International Competition, the Carmel and Coleman Chamber Music Competitions, and in Poland, the Henryk Wieniawski and Tadeusz Wronski International Competitions. She was recently a recipient of the New England Conservatory Outstanding Alumni Award. Ms. Kurkowicz currently serves as concertmistress of the Boston Philharmonic and the Berkshire Symphony, and previously held the same post for the Boston Modern Orchestra Project and the Vermont Symphony. She was a member of the acclaimed Metamorphosen and Orpheus Chamber Orchestras. Since the fall of 2002 she has been Artist in Residence at Williams College in Williamstown, Massachusetts, recently joined the faculty at Tufts University, and during 2011/13 served on the faculty of the New England Conservatory of Music. An avid and sought-after chamber musician, she has collaborated with such eminent artists as Jaime Laredo, Charles Treger, Laurence Lesser and James Buswell. She is a founding member and Artistic Advisor of the Chameleon Arts Ensemble of Boston and the Plymouth Chamber Music Festival. As a guest artist, she has participated in the Mozarteum Festival in Salzburg, the Ravinia Festival, Barge Concert Series (NY), the Asia Pacific Festival in Wellington, New Zealand, the Rockport Chamber Music Festival, the EuroSilesia International Music Festival, the Warsaw Music Gardens Festival and the Martha’s Vineyard Chamber Music Society.

Ms. Kurkowicz is a strong advocate of contemporary music; she has premiered works by Gunther Schuller, Ralph Shapey, Poul Ruders, David Kechley and Grazyna Bacewicz. Her recent world premiere of Shirish Korde’s Violin Concerto with the Polish National Radio Symphony Orchestra met with enthusiastic response. Subsequent performances in Europe and New Zealand were equally well received, and the United States premiere with the Boston Philharmonic Orchestra was a highlight of the 2007-2008-concert season. In August 2009 Joanna Kurkowicz released a recording, on the Chandos label, of the Violin Concertos No. 1, 3 and 7 of Grazyna Bacewicz with the Polish Radio Symphony Orchestra under conductor Lukasz Borowicz, to world- wide critical acclaim. It received the prestigious Diapason d’Or Award (March 2010) and was nominated for the “Preis der Deutchen Schallplatten Kritik 2009” (the German Record Critics Award) as well as Poland’s most important music recording award “Fryderyk 2010.” The CD has been placed #6 on Amazon.com list of top 25 Best Classical Albums of 2009. Volume 2 of Bacewicz Violin Concertos was released on July 2011. Her previous CD of Bacewicz’ music for violin and piano, also released on Chandos Records, was praised in Fanfare magazine as a “spectacular release” and in International Record Review for “passion, authority and sheer e élan,” and received equally enthusiastic reviews in the Strad magazine, American Record Guide, and Muzyka21. Her Bridge Records release featuring music of Alfred Schnittke was noted in the Strad for “strong impact… her playing holds one enthralled, demonstrating strong personality and assured technique,” and was chosen by the Boston Herald as “Best of Year 2001.” Ms. Kurkowicz can also be heard on the Bridge Records, Centaur, CRI, Capstone, Albany, New World Records, Neuma and Archetype labels. Her Boston premiere of sonatas by Rebecca Clarke was listed in the Boston Globe “Best Concerts of 2000.”

A native of Lublin, Poland, Joanna Kurkowicz earned a Master of Music Degree with distinction from the Paderewski Conservatory of Music in Poznan, Poland, in the studio of Jadwiga Kaliszewska. She came to the United States in 1992 to complete a second Master of Music degree as a student and teaching assistant of Charles Treger at the University of Massachusetts, Amherst. Ms. Kurkowicz completed the prestigious Artist Diploma Program at the New England Conservatory of Music, where she studied with Masuko Ushioda. Joanna Kurkowicz plays on a Petrus Guarnerius violin dated from 1699.

About Doris Stevenson
Doris Stevenson has won lavish praise from critics and public alike in performances around the world. She has soloed with the Boston Pops, played at Carnegie Hall and Alice Tully Hall in New York, the Kennedy Center in Washington D.C., Salle Pleyel in Paris, Sala de Musica Arango in Bogota, and Suntory Hall in Tokyo. Her acute sensitivity and musicianship have made her a sought-after partner with some of the leading lights in string playing. She has performed with Gregor Piatigorsky, Ruggiero Ricci and

Paul Tortelier, great players of the past. Early in her career she was invited by Heifetz and Piatigorsky to perform with them in their chamber concerts. She was pianist for the cello master classes of Piatigorsky, who described her as “an artist of the highest order.” The list of distinguished artists she has performed with includes cellists Andre Navarra, Leslie Parnas and Gary Hoffman, violinists Charles Castleman and Elmar Olivera, violists Walter Trampler and Paul Neubauer and singers Kaaren Erickson and Catherine Malfitano. She is a founding member of the Sitka Summer Music Festival in Alaska and has toured throughout that state, playing in many remote Native Alaskan communities. She has participated in many chamber music festivals and has performed in 48 of the 50 states. She recently performed with cellist Zuill Bailey at the Phillips Gallery in Washington D.C., at Bargemusic in New York and at Smith College. She plays a score of outreach concerts each season for the Piatigorsky Foundation in schools, libraries, prisons, and remote communities, bringing live classical music with commentary to people who wouldn’t otherwise hear it.

Doris Stevenson is deeply committed to performing new music. In the last three years she has played in concert the works of twenty living composers. She was the first woman to perform Frederick Rzewski’s masterpiece, De Profundis for speaking pianist, which she brought to New York City to perform as a Williams in New York concert. Her many recordings include six major works by David Kechley and two by Ileana Velazquez Perez, the Saint-Saens violin sonatas with Andres Cardenes, the complete Mendelssohn cello works with Jeffrey Solow, and the Brahms Sonatas with cellist Nathaniel Rosen. She helped make a CD of Stravinsky rarities with violinist Mark Peskanov received a Grammy nomination. Miss Stevenson taught for ten years at the University of Southern California and has been Lyell B. Clay Artist in Residence at Williams College since 1987.