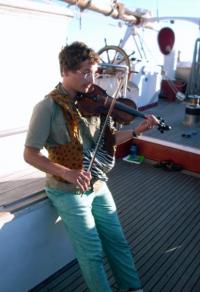 The Williams College Department of Music will present a Junior Recital featuring Leo Brown on Tuesday, May 4, at 7 p.m. in Brooks-Rogers Recital Hall on the Williams College campus. This free event is open to the public and does not require tickets.

Leo and friends will present a diverse program of music from the classical canon as well as from a variety of folk traditions. The recital will be a thorough exploration of divergent but inextricably linked modes of creative musical expression.

Works featured in this recital will include unaccompanied violin sonatas by Bach and Prokofiev as well as songs from the high seas, the mountains of North Carolina, and the golden age of Soviet cartoon series.

Leo Brown hails from Schenectady, New York and has played the violin since he was five years old. On campus, he performs with the Student Symphony, Berkshire Symphony, and Williams Symphonic Winds. Leo is a student of Joanna Kurkowicz and has studied with Betty Jean Hagen, Michael Emery, Christopher Neubert, and Barbara Lapidus. He is majoring in American Studies and Russian. Leo’s current life plan is to pursue knowledge, achieve balance, appreciate family and friends, and keep things in perspective.