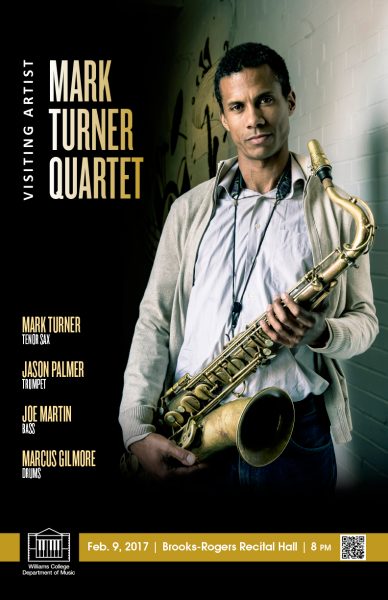 Due to a snowstorm on February 9 we had to cancel this concert. Luckily, we are now able to rebrand that cancelation as a delay. If you thought you missed the Mark Turner Quartet the first time, you now have a well deserved second chance!

A NEW DATE!
The Williams College Department of Music presents Mark Turner Quartet on Monday, Feb. 20 at 8 p.m. in Brooks-Rogers Recital Hall on the college campus. The concert is free and open to the public.

About Mark Turner
Mark Turner is one of the most admired saxophonists of his generation, renowned for his exploratory intellect and intimate expressiveness on the full range of the tenor horn. Lathe of Heaven is his sixth album as a leader, but the first under his own name since 2001. It’s also his debut as a leader for the record label ECM, following two fine albums in the cooperative trio Fly with Larry Grenadier and Jeff Ballard, plus appearances on recordings by Billy Hart and Enrico Rava. Turner leads a quartet of kindred spirits, especially the voice of trumpeter Jason Palmer as they play long, introspective lines of hypnotic grace. The interplay locks in with the rhythm section of bassist Joe Martin and drummer Marcus Gilmore. The subtle volatility of their sound is a mesmerizing musical experience.

In a career that spans two decades and encompasses a broad array of musical ventures Mark Turner has emerged as a towering presence in the jazz community. With a distinctive, personal tone, singular improvisational skills and an innovative, challenging compositional approach, he’s earned a far-reaching reputation as one of jazz’s most original and influential musical forces. A New York Times profile of Turner titled “The Best Jazz Player You’ve Never Heard” called him “possibly jazz’s premier player,” noting his reputation amongst his peers and his influential stature in the jazz world.

With an impressive musical history already under his belt and more on the way, Mark Turner is in the midst of a creative renaissance. As The New York Times noted, “His best work is clearly still ahead of him.”