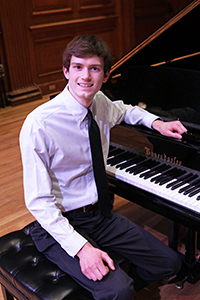 This program features works of Beethoven, Ravel, and Chopin. Nathaniel Vilas ‘17 began playing the piano at the age of seven. A native of Brunswick, Maine, in high school he won recognition throughout the state under the tutelage of Naydene Bowder, including awards at the Young Stars of Maine, the Ocy Downs, and the Pine Tree competitions. He was also a finalist in the Bangor Symphony Orchestra concerto competition in 2013 and has participated in several piano festivals, most notably Music Without Borders, alongside emerging artists from countries as far-reaching as Russia, Bulgaria, and the Netherlands. Most recently, he was a winner of the Berkshire Symphony Student Soloist competition in 2016 and performed the first movement of the Grieg piano concerto with the orchestra. He has studied with Doris Stevenson at Williams for the past four years.

Also a bassoonist and jazz pianist, Nathaniel maintains an active presence in the Williams music department, playing in ensembles including the Berkshire Symphony, the Williams Jazz Ensemble, and the Williams Jazz Octet, among others. A double major in physics and music, he is presently completing a thesis using lasers to probe the structure of atomic indium. Next year he will attend the University of Cambridge, UK, to complete the MPhil in physics before beginning a PhD in the discipline at Harvard University the following year. He would like to extend his sincere thanks to Doris Stevenson, for all the pianistic insight she has offered over the past four years; to the Williams music department, for the great diversity of artistic opportunities it has provided him; and to friends and family, for their continued support of all his pursuits.