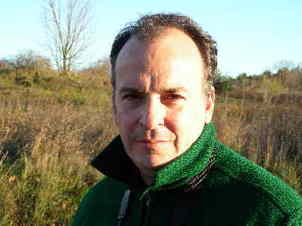 Phil Kline is a composer and sound artist, who makes music in many genres and contexts, from experimental electronics and sound installations to songs, choral, theater, chamber and orchestral music.

Raised in Akron, Ohio, he came to New York to study English Literature and music at Columbia. After graduation, he dived into the downtown New York arts scene: founding the rock band The Del-Byzanteens with Jim Jarmusch and James Nares, collaborating with Nan Goldin on the soundtrack to The Ballad of Sexual Dependency, and playing guitar in the notorious Glenn Branca Ensemble.

His early compositions grew out of his solo performance art and often used boombox tape players as a medium, most notably in the Christmas piece Unsilent Night, which debuted in the streets of Greenwich Village in 1992 and is now performed annually in dozens of cities around the world.

Other notable early compositions include Zippo Songs, a song cycle for Theo Bleckmann, based on poems Vietnam vets inscribed on their Zippo lighters, The Blue Room and Other Stories, written for string quartet Ethel, and Exquisite Corpses, commissioned by the Bang on a Can All-Stars. The music theater spectacle, Locus solus, based on the novel by Raymond Roussel, was presented at the Ryerss Mansion Museum in Philadelphia in 2006.

More recent works include the Mass John the Revelator, written for vocal group Lionheart; The Long Winter, written for pianist Sarah Cahill; and scores for three evening-length dance pieces by Wally Cardona: Everywhere, Site and Really Real. The sound installation World on a String opened the season at the Krannert Center in Champaign-Urbana, Illinois, in September 2007 and SPACE for string quartet and electronics was performed by Ethel at the gala reopening of Alice Tully Hall in 2009.

2011 saw the premieres of A Dream and its Opposite, written for the La Jolla Symphony Orchestra, Canzona a due Cuori, commissioned by the St. Luke’s Chamber Ensemble, and a book of organ pieces commissioned for the gigantic Kotschmar Organ of Portland, Maine. A new monodrama for Theo Bleckmann, Out Cold, premiered at the BAM Next Wave Festival in October 2012.

Kline is currently working on an opera, Tesla in New York, in collaboration with writer-director Jim Jarmusch. He lives on the Lower East Side of Manhattan with his wife and daughter.