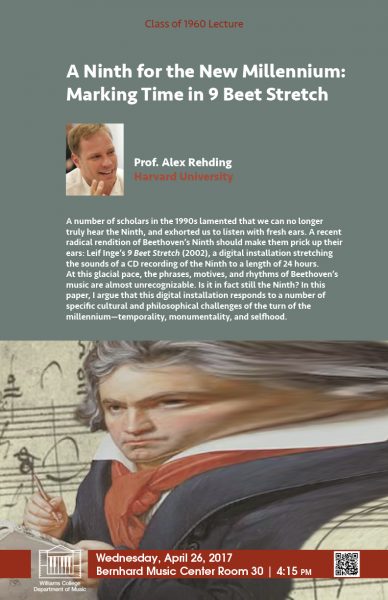 Alexander Rehding is the Fanny Peabody Professor of Music at Harvard University. He offers a Class of 1960 Lecture titled, A Ninth for the New Millennium: Marking Time in 9 Beet Stretch. A number of scholars in the 1990s lamented that we can no longer truly hear the Ninth, and exhorted us to listen with fresh ears. A recent radical rendition of Beethoven’s Ninth should make them prick up their ears: Leif Inge’s 9 Beet Stretch (2002), a digital installation stretching the sounds of a CD recording of the Ninth to a length of 24 hours. At this glacial pace, the phrases, motives, and rhythms of Beethoven’s music are almost unrecognizable. Is it in fact still the Ninth? In this paper, I argue that this digital installation responds to a number of specific cultural and philosophical challenges of the turn of the millennium—temporality, monumentality, and selfhood. Not only is Leif Inge’s innovative 9 Beet Stretch an appropriate version of the Ninth for the digital age, but also for our time.

There will be a 9 Beat Stretch music installation on Monday April 24 at 4:15pm. This work is Ludwig van Beethoven’s 9th symphony stretched to 24 hours, with no pitch distortions. There will be two complete performances which begin and continue throughout the day in the sculpture court yard between Chapin Hall and Brooks-Rogers Recital Hall. At night, the performance will be moved into Brooks-Rogers Recital Hall or Chapin Hall depending on what events are occurring.

At Harvard Professor Rehding is an affiliate of the Department of Germanic Languages and Literatures, and an associate at the Center for European Studies. His work lies at the crossroads of music history and theory. His publications include Hugo Riemann and the Birth of Modern Musical Thought (Cambridge University Press, 2003) and Music and Monumentality: Commemoration and Wonderment in Nineteenth-Century Germany (Oxford University Press, 2009). While his work has focused on European music of the 19th–20th centuries, Rehding is interested in the transfer of music from non-Western contexts during different ages, using different technologies—for instance, as in the group-curated exhibition Transmission/Transformation: Sounding China in Enlightenment Europe (2011)—and more broadly in media archaeology and sound studies.

This year, Rehding explores the tense relations between 19th-century musicians and scientists. Although acoustics offered some penetrating insights into the nature of sound, musicians were often noticeably reluctant to accept these findings. The reason for this reluctance is easy to understand: while romantic aesthetics raised music up to new philosophical heights, the material reality of acoustics threatened to drag it down again.

Rehding holds degrees from the University of Cambridge and has received a number of fellowships and prizes, including from the Alexander von Humboldt Foundation, the American Council of Learned Societies, and the John Simon Guggenheim Memorial Foundation. He was the convener of a John E. Sawyer Seminar on the Comparative Study of Cultures, Hearing Modernity, which explored sound studies from an interdisciplinary perspective.