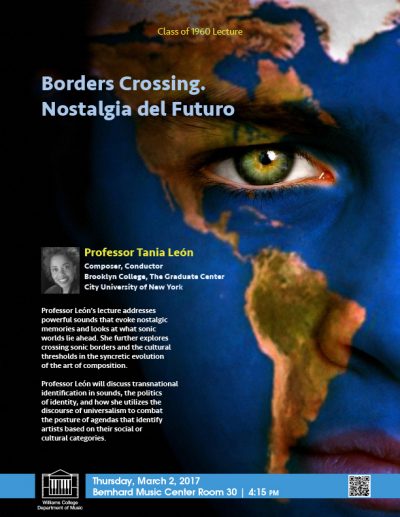 Tania León (b. Havana, Cuba), a vital personality on today’s music scene, in demand as composer and conductor, has been recognized for her significant accomplishments as an educator and advisor to arts organizations.

Professor Tania León of Brooklyn College and City University of New York lectures at the Williams College Department of Music on Thursday, March 2, 2017, at 4:15 p.m. in Bernhard Music Center Room 30 on the Williams College campus. This lecture is sponsored by the Class of 1960 Scholars Fund and is free and open to the public.

Prof. León’s lecture is titled, Nostalgia del Futuro. She addresses powerful sounds that evoke nostalgic memories – and looks at what sonic worlds lie ahead? She further explores crossing sonic borders and the cultural thresholds in the syncretic evolution of the art of composition.

Crossing cultural, aesthetic and national borders has yielded changes in the way composers approach the art of composition since the first traces of the evolution of sound. At an early age, León’s own family life exposed her to various cultural influences. Later on, those cultural influences changed with the dichotomy of Conservatory Universal training in relation to the music of her native country. This led to a constant questioning regarding place of origin, including a musical aesthetic preference, and the transnational identification in sounds as opposed to art-music, including questions about the politics of identity and the response of audiences and critics, aesthetics of their works, as well as self appearance that may result in composers being pigeonholed into preconceived categories. Leon also thought about Latin American identities versus ideals that embrace multiculturalism and pluralism, music academic languages (universalism) and the individual creative autonomy as opposed to ethnic or national concerns. Theoretical perspectives mix with relevant elements of her compositional styles and encounters of musical ideologies. Compositional practices regarding rhythm, melody, harmony, texture, and form including jazz and Latin American music may be perceived as influences in her oeuvre. Throughout her works, she utilizes the discourse of universalism to combat the posture of agendas that identify artists based on their social or cultural categories.

About Tania León
Tania León is highly regarded as a composer and conductor, and for her accomplishments as an educator and advisor to arts organizations. A founding member of the Dance Theatre of Harlem, León instituted the Brooklyn Philharmonic Community Concert Series and co-founded the Sonidos de las Américas festivals with the American Composers Orchestra. In 2010 she launched the organization “Composers Now” and the month-long Composers Now Festival, celebrating living composers of all genres throughout New York City.

León’s opera Scourge of Hyacinths, based on a play by Wole Soyinka with staging and design by Robert Wilson, was commissioned by Hans Werner Henze for the Munich Biennale, where it won the coveted BMW Prize. Among her recent commissions is “Little Rock Nine,” an opera based on a significant moment in the history of civil rights, with libretto by Thulani Davis and historical research by Henry Louis Gates, Jr.

León has collaborated with authors John Ashbery, Margaret Atwood, Rita Dove and Derek Walcott. Commissions include the Cincinnati Symphony, NDR Sinfonie Orchester, and Ensemble Modern among others. Her work has also been performed by L’Orchestre de la Suisse Romande, the NDR and the China National Symphony, among others.

As conductor, León has led the Symphony Orchestra and Chorus of Marseille, the Gewandhausorchester, the Guanajuato Symphony Orchestra (Mexico), Symphony Orchestra of Johannesburg, (South Africa), and the New York Philharmonic. She has lectured at many universities and received Honorary Doctorate Degrees from Colgate University, Oberlin, and SUNY Purchase College. A Professor at Brooklyn College and at CUNY-Graduate Center, she was named Distinguished Professor of the City University of New York in 2006. In 2010 she was inducted into the American Academy of Arts and Letters.

“Whereas: In a city of 8.5 million people, many of whom hail from around the world, our arts scene is as diverse as our residents. We are tremendously proud of the many different global traditions and heritages that have helped to shape our cultural landscape, and my administration is determined to provide people of all backgrounds with the opportunity to participate in our dynamic arts communities. With a mission to empower all living composers and honor their incredible work, Composers Now is an important ally in these efforts”

If you would like to be removed from this distribution reply with “please remove.”