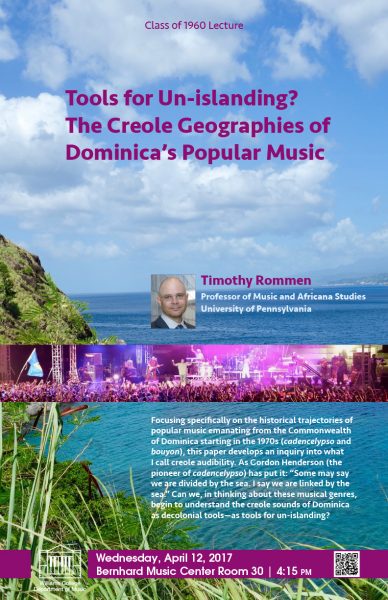 Professor of Music and Africana Studies Timothy Rommen of University of Pennsylvania School of Arts and Sciences gives a lecture titled, “Tools for Un-islanding? The Creole Geographies of Dominica’s Popular Music” on Wednesday, April 12 at 4:15 p.m. in Room 30 of Bernhard Music Center on the Williams College campus. This lecture is sponsored by the Class of 1960 Scholars Fund. The lecture is free and open to the public.

Focusing specifically on the historical trajectories of popular music emanating from the Commonwealth of Dominica starting in the 1970s (cadencelypso and bouyon), this paper develops an inquiry into what Prof. Rommen calls creole audibility. Creole audibility wrestles with the simultaneous and somewhat paradoxical audibility (within other genres) and inaudibility (as discreet genres) of these creole sounds within and without the Caribbean. Prof. Rommen argues that the linguistic, processual, and identitarian uses of the “creole” so thoroughly integrated into analyses of Caribbean social and cultural contexts are inadequate to the Dominican scene and, by extension, to the contemporary moment throughout the region. New questions emerge in light of these Dominican musical trajectories: Can we think about creole sounds as instantiating, following Michel Foucault, a particular type of (very productive) heterotopia? That is, can cadencelypso and bouyon play the role of a sonic mirror that is simultaneously sounding the “there where I am” and the “there where I am not” of the Dominican social imaginary? What might thinking about these genres as sonic mirrors (both utopian and heterotopic, both audible and inaudible, both bounded and borderless) afford us in terms of developing critical purchase on the contemporary dynamics of small places (Dominica) and peripheral spaces (the Caribbean)? Can creole audibility be productively nuanced by recent work in archipelago studies that explores how the ubiquitous presence of the sea informs the relations between simultaneously interconnected yet isolated and discreet spaces? Put otherwise, are cadencelypso and bouyon shaped by an archipelagic (as opposed to an islanded) understanding of space that informs both social imaginaries and sonic possibilities? As Gordon Henderson (the pioneer of cadencelypso) has put it: “Some may say we are divided by the sea. I say we are linked by the sea.” Finally, can we, in answering these questions, begin to understand the creole sounds of Dominica as decolonial tools—as tools for un-islanding?

Timothy Rommen (Ph.D. University of Chicago, 2002) specializes in the music of the Caribbean with research interests that include folk and popular sacred music, popular music, critical theory, ethics, tourism, diaspora, and the intellectual history of ethnomusicology. He is the author of Mek Some Noise: Gospel Music and the Ethics of Style in Trinidad (University of California Press, 2007) and Funky Nassau: Roots, Routes, and Representation in Bahamian Popular Music (University of California Press, 2011). He is also co-editor, with Daniel Neely, of Sun, Sea, and Sound: Music and Tourism in the Circum-Caribbean (Oxford University Press, 2014) and editor of and contributing author to Excursions in World Music (Routledge, 2016). His current projects include a musical ethnography of Dominica and a volume, co-edited with Jocelyne Guilbault, exploring the political economy of music and sound in the Caribbean tourism industry.