Class of 1960 Lecture
Prof. Lewis Porter
Louis Armstrong in Context--What Made Him Stand Out? 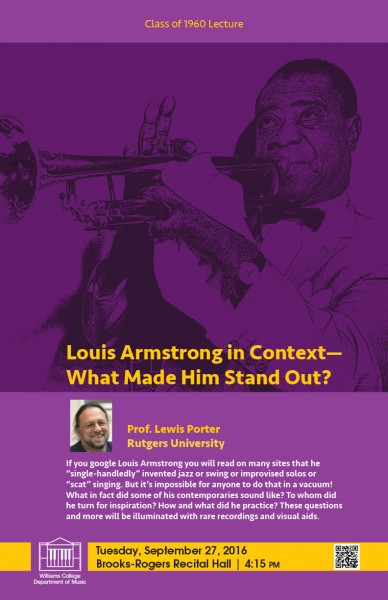 Professor Lewis Porter of Rutgers University gives a lecture titled, “Louis Armstrong in Context–What Made Him Stand Out?” on Tuesday, September 27, at 4:15 p.m. in Brooks-Rogers Recital Hall, Bernhard Music Center, on the Williams College campus. This lecture is sponsored by the Class of 1960 Scholars Fund and is free and open to the public.

If you google Louis Armstrong you will read on many sites that he “single-handledly” invented jazz or swing or improvised solos or “scat” singing. But it’s impossible for anyone to do that in a vacuum! What in fact did some of his contemporaries sound like? To whom did he turn for inspiration? How and what did he practice? All of these questions and more will be illuminated with rare recordings and visual aids.

Lewis Porter, Ph.D., has long been known as a jazz educator and author, most notably of a celebrated volume on John Coltrane. He maintains a very active career as a jazz pianist and composer. He has performed across the USA and Europe with Dave Liebman, Joe Lovano, Wycliffe Gordon, Ravi Coltrane, Marc Ribot, and many others. He appears on 20 albums. He received a Grammy nomination in 1995. A music professor at Rutgers in Newark, he also teaches private students worldwide.

Photo of Lewis Porter: Bill May