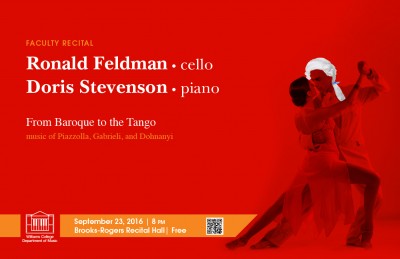 The Williams College Department of Music presents cellist Ronald Feldman together with pianist Doris Stevenson on Friday, Sept. 23 at 8 p.m. in Brooks-Rogers Recital Hall. This free event is open to the public.

“From Baroque to the Tango,” is an exploration of the continuum of music that stretches back to the Baroque era of Domenico Gabrielli, to the Romantic style of Dohnanyi, and arrives to the 20th century composer Astor Piazzolla, whose music burst with the charm of the irresistible Argentine tango and captured the imagination of the American concert audience.

About Ronald Feldman
After a long career in the Boston Symphony Orchestra’s cello section starting in 1967 at the age of 19, Mr. Feldman has gone on to receive critical acclaim for a wide variety of musical achievements. Formerly music director and conductor of the Worcester Symphony Orchestra and of the Boston new music ensemble Extension Works, Mr. Feldman was also music director and conductor of the New England Philharmonic for five seasons. In 1991 he and the Berkshire Symphony were awarded the American Symphony Orchestra League’s ASCAP Award for Adventuresome Programming of Contemporary Music. He is the musical director of the Longwood Symphony and continues to be an active cellist, conductor, and member of the Williams Chamber Players.

About Doris Stevenson
Doris Stevenson is artist in residence in piano at Williams and has collaborated with Mr. Feldman for many years. Doris Stevenson has won lavish praise from critics and public alike in performances around the world. She has soloed with the Boston Pops, played at Carnegie Hall and Alice Tully Hall in New York, the Kennedy Center in Washington D.C., Salle Pleyel in Paris, Sala de Musica Arango in Bogota, and Suntory Hall in Tokyo. Her acute sensitivity and musicianship have made her a sought-after partner with some of the leading lights in string playing. She has performed with Gregor Piatigorsky, Ruggiero Ricci and Paul Tortelier, great players of the past. She was the first woman to perform Frederick Rzewski’s masterpiece, De Profundis for speaking pianist, which she brought to New York City to perform as a Williams in New York concert. Her many recordings include six major works by David Kechley and two by Ileana Velazquez Perez, the Saint Saens violin sonatas with Andres Cardenes, the complete Mendelssohn cello works with Jeffrey Solow, and the Brahms Sonatas with cellist Nathaniel Rosen. A CD of Stravinsky rarities with violinist Mark Peskanov received a Grammy nomination. Ms. Stevenson taught for ten years at the University of Southern California and has been Lyell B. Clay Artist in Residence at Williams College since 1987.