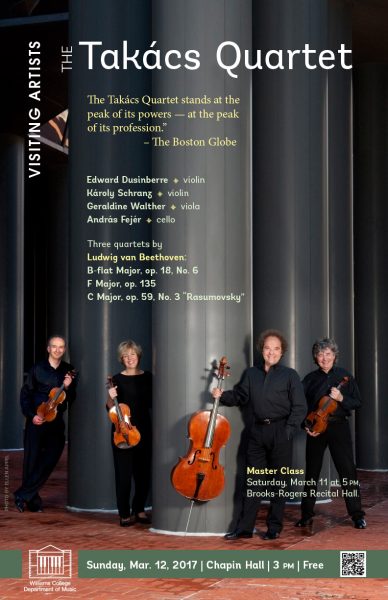 The Williams College Department of Music presents Takács Quartet on Sunday, March 12 at 3 p.m., in Chapin Hall on the college campus. Members of the ensemble also hold a master class on Saturday, March 11 at 5 p.m. featuring talented Williams music students in Brooks-Rogers Recital Hall.  These events are free and open to the public.

About the Takács Quartet
The members of the Takács Quartet are Christoffersen Faculty Fellows at the University of Colorado Boulder. The Quartet has helped to develop a string program with a special emphasis on chamber music, where students work in a nurturing environment designed to help them develop their artistry. The Quartet’s commitment to teaching is enhanced by summer residencies at the Aspen Festival and at the Music Academy of the West, Santa Barbara. The members of the Takács are Visiting Fellows at the Guildhall School of Music and Drama, London.

The Quartet’s award-winning recordings include the complete Beethoven Cycle on the Decca label. In 2005 the Late Beethoven Quartets won Disc of the Year and Chamber Award from BBC Music Magazine, a Gramophone Award, Album of the Year at the Brit Awards and a Japanese Record Academy Award. Their recordings of the early and middle Beethoven quartets collected a Grammy, another Gramophone Award, a Chamber Music of America Award and two further awards from the Japanese Recording Academy. Of their performances and recordings of the Late Quartets, the Cleveland Plain Dealer wrote “The Takács might play this repertoire better than any quartet of the past or present.”

In 2006 the Takács Quartet made their first recording for Hyperion Records, of Schubert’s D804 and D810. Subsequent recordings for Hyperion include  Brahms’ Piano Quintet with Stephen Hough (Grammy nomination), Brahms’ Quartets Op. 51 and Op. 67, Schumann’s Piano Quintet with Marc-Andre Hamelin, the complete Haydn “Apponyi” Quartets, Op. 71 and 74 and the Schubert Quintet D956 with Ralph Kirshbaum. The three Britten Quartets were released in 2013, followed by the Brahms Viola Quintets with Lawrence Power, viola, and the Shostakovich Piano Quintet with Mr. Hamelin.  Upcoming Hyperion recordings include the two Janacek Quartets and Smetana’s “From My Life”, the Debussy Quartet and the Franck Piano Quintet, again with Marc-Andre Hamelin, the Dvorak Op. 105 Quartet and his Viola Quintet Op. 97 with Lawrence Power, viola.

The Quartet has also made sixteen recordings for the Decca label since 1988 of works by Beethoven, Bartók, Borodin, Brahms, Chausson, Dvořák, Haydn, Mozart, Schubert and Smetana. The ensemble’s recording of the six Bartók String Quartets received the 1998 Gramophone Award for chamber music and, in 1999, was nominated for a Grammy.