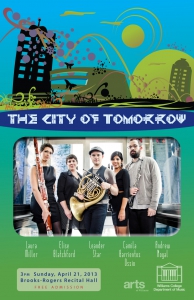 This “retro-futurist” quintet is the only wind quintet to have won a gold medal at the Fischoff National Chamber Music Competition in the past ten years. The City of Tomorrow advocates for the quality and expansion of wind quintet repertoire and performance. This performance by The City of Tomorrow is part of the music department’s Visiting Artist series, sponsored by the W. Ford Schumann ’50 Performing Arts Endowment.

The musicians of The City of Tomorrow bring a great variety of experience to the group. Flutist Elise Blatchford has performed with the Jolas Quintet at the Kennedy Center in Washington, D.C. and performing Joan Tower’s Flute Concerto at the Aki Festival for New Music at the Cleveland Museum of Art. Elise earned degrees from the Oberlin Conservatory of Music, and the San Francisco Conservatory of Music. Her colleague, oboist Andrew Nogal is a soloist and chamber musician equally at home with avant-garde contemporary works and the mainstream classical repertoire. Mr. Nogal has performed with the Chicago Symphony Orchestra MusicNOW ensemble, experimental jazz collective the Tomorrow Music Orchestra, the City of Tomorrow, and Ensemble Dal Niente. Mr. Nogal has two bachelors degrees – one in music performance, the other in art history — from Northwestern University. Bolivian-born clarinetist Camila Barrientos has enjoyed a wide range of musical experiences as an active solo, chamber, and orchestral musician. Ms. Barrientos has performed in venues ranging from Carnegie Hall to the Vatican, from Teatro Teresa Carreño (Caracas) to a slaughterhouse-turned community Art Space in her hometown of Cochabamba. Ms. Barrientos is a recent graduate of the master of music program at the Manhattan School of Music in New York. Laura Miller, bassoon, has performed around the world as a soloist, chamber, and orchestral musician. She has both bachelors and masters degrees in music performance from the University of Texas at Austin. Leander Star is a versatile French horn player and an accomplished chamber musician, having performed with members of the Chicago Symphony in concerts with the Chicago Chamber Musicians. A player on the national orchestral scene, Mr. Star has performed with the Civic Orchestra of Chicago, the Portland Opera, Boise Philharmonic, and the New Mexico Symphony Orchestra. Mr. Star holds degrees in horn performance from Northwestern University and the San Francisco Conservatory of Music.