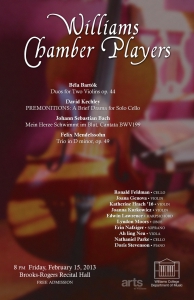 The Williams Chamber Players is a group made up of musicians seasoned by careers rich in musical diversity. In this concert the group presents contrasting styles with composers from the 18th, 19th, 20th, and 21st centuries.

Some of Bela Bartok’s best works challenge our popular conception of 20th century music. Joana Genova and Williams student violinist Katherine Hrach ’16 present excerpts from Bartók’s Duos for Two Violins op. 44. These compositions were originally intended by the composer as practice pieces. If anything, Bartok’s genius radiates forth from a willful simplicity. The result is a delight to performer and listener.

Professor of Music at Williams David Kechley offers a piece completed just last year. Mr. Kechley is an musician of international renown. PREMONITIONS: A Brief Drama for Solo Cello was written for Nathaniel Parke and is a brief, but virtuoso work, which exploits the full range and expressive power of the cello. It begins with a foreboding opening melody soon interrupted by violent outbursts and followed by a more dance-like rhythm. Each of these musical characters is then developed to its logical conclusion before the narrative ultimately and enigmatically falls away.

The Williams Chamber Players is a resident chamber ensemble, founded at Williams College in 1999. Its purpose is to present concerts for the college and community throughout the academic year. Antecedents of the Williams Chamber Players are The Williams Trio, founded in 1970, and the Group for 20th Century Music, founded in 1989. Repertoire for concerts is drawn from the standard chamber music repertoire with special attention to music of the 20th and 21st centuries, and to music by Williams composers. Musicians are normally drawn from the ranks of Artists-in-Residence, Artist Associates, and other faculty, as well as occasional visiting artists.