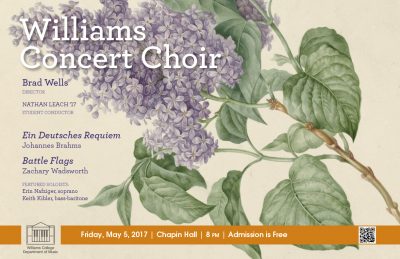 The Williams College Department of Music presents the Williams Concert Choir and Williams Chamber Choir on Friday, May 5 at 8 p.m. in Chapin Hall on the Williams campus. This free event is open to the public.

The Concert and Chamber Choirs open this performance with Battle Flags by composer and faculty member Zachary Wadsworth. The piece is an introduction to Brahms’ meditation on mortality, Ein deutsches Requiem, and is based on a section of the Walt Whitman poem “When Lilacs Last in the Dooryard Bloom’d.” When the piece was performed at the Kennedy Center, The Washington Post said: “Delicately scored for chorus, obbligato string quartet and string orchestra, [Battle Flags] was fresh, deeply felt and strikingly original in a way that complemented rather than competed with the gigantic “Requiem.” Nathan Leach, Class of 2017, conducts.

The Concert Choir and the Chamber Choir continue our proud choral tradition with performances including masterworks and world premieres. These two ensembles explore music from the medieval to the modern eras and from throughout the world. Recent tours have taken the singers to Italy, Argentina, and South Africa.