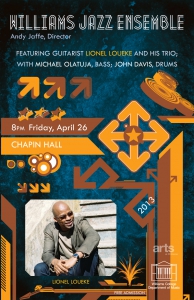 The Williams College Department of Music presents the Lionel Loueke Trio, featuring guitarist Lionel Loueke performing with the Williams Jazz Ensemble directed by Andy Jaffe on Friday, April 26 at 8 p.m. in Chapin Hall on the Williams campus. This free event is open to the public.

The Williams Jazz Ensemble’s special guest is a musician who draws on many traditions. The resulting blend pleases jazz aficionados, if the critical reviews are to be trusted. More importantly, he speaks his musical language so clearly and fluently that everyone can join the conversation. Praised by his mentor Herbie Hancock as “a musical painter,” Mr. Loueke combines harmonic complexity, soaring melody, a deep knowledge of African folk forms, and conventional and extended guitar techniques to create a warm and evocative sound of his own. He is hailed as a “gentle virtuoso” by Jon Pareles of The New York Times. Mr. Loueke brings jazz into vibrant contact with the sounds of West Africa, in particular his native Benin. The title of his latest album Heritage is a direct reference to his personal odyssey. “I have two heritages,” Mr. Loueke says. “One is from my ancestors from Africa, and that goes through my music, my body, my soul, every aspect of what I do. But also I have the heritage from the Occident, from the West, from Europe and the U.S. I speak English, I speak French, and I have that heritage too. I called [my latest] album Heritage because I’ve been blessed by all different parts of the world, and most of the songs reflect that.”

Starting out on vocals and percussion, Mr. Loueke picked up the guitar late, at age 17. After his initial to exposure to jazz in Benin, he left to attend the National Institute of Art in nearby Ivory Coast. In 1994 he left Africa to pursue jazz studies at the American School of Modern Music in Paris, then came to the U.S. on a scholarship to Berklee. From there, Mr. Loueke gained acceptance to the Thelonious Monk Institute of Jazz, where he encountered bandmates Biolcati, Nemeth, Parlato and other musicians with whom he would form lasting creative relationships.