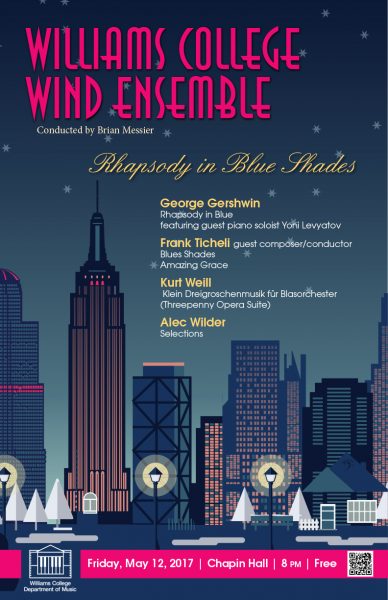 About Brian Messier
Prof. Brian Messier’s research on audience attraction, engagement, and retention has resulted in his participation in the New Audiences and Innovative Practices program in Iceland; guest speaking engagements in Minnesota and the Netherlands; and his appointment to the College Band Director’s National Association committee for the advancement of wind music in our culture. In addition to his position at Williams College, Messier is also Artistic Director of The Valley Winds and director of bands at Belchertown High School. Messier is in high demand as a clinician and guest conductor, and specializes in integrating collaborative practice and innovative techniques into the large ensemble setting.

About Yoni Levyatov
Yoni Levyatov, winner of the San Jose International Piano Competition, is recognized as a soloist and chamber artist with “an appealing electricity” (The New York Times). The Russian-born Israeli pianist and composer made his recital debut at the Alice Tully Hall at Lincoln Center, and his New York City concerto debut as the winner of the Dora Zaslavsky Koch Competition performing the Schumann Piano Concerto under the baton of Philippe Entremont.

Mr. Levyatov has been a concerto soloist with the Jerusalem Symphony Orchestra, Manhattan Chamber Orchestra, the Bogota Philharmonic, Denver Brass, and the Philharmonic Orchestra of the Americas. He was a recipient of the Dorothy McKenzie Artist Recognition Award, Harold Bauer Award, and was a Silver Medalist at the International Boesendorfer Piano Competition. In Tel Aviv he was awarded the Clairmont Prize and has been a scholar of the America-Israel Cultural Foundation since 1990.

His compositional oeuvre includes works for solo instruments, chamber ensembles, and orchestra, and has been performed throughout Europe, the United States, and Israel, with a recent orchestral premiere at Weill Hall in New York City. Beyond the classical realm, he has toured with the JP Joffre Hard Tango Band across the US and internationally. Highlights have included the Panama Canal, as well the Vermont Music Festival performing the Bacalov Triple Concerto for Piano, Bandoneon, Soprano, and Orchestra. Touring Alaska, he has been featured at the Sitka Music Festival and Juneau Jazz and Classics, presenting the first-ever concert in the Eskimo village of Chevak.

Mr. Levyatov is on faculty at Temple University and Summit Music Festival, and holds a Doctor of Musical Arts degree from Temple University, and a Master of Music degree as well as an Artist Diploma from Manhattan School of Music.

Frank Ticheli
Frank Ticheli’s music has been described as being “optimistic and thoughtful” (Los Angeles Times), “lean and muscular” (New York Times), “brilliantly effective” (Miami Herald) and “powerful, deeply felt crafted with impressive flair and an ear for striking instrumental colors” (South Florida Sun-Sentinel). Ticheli (b. 1958) joined the faculty of the University of Southern California’s Thornton School of Music in 1991, where he is Professor of Composition. From 1991 to 1998, Ticheli was Composer in Residence of the Pacific Symphony.

Ticheli is well known for his works for concert band, many of which have become standards in the repertoire. In addition to composing, he has appeared as guest conductor of his music at Carnegie Hall, at many American universities and music festivals, and in cities throughout the world, including Schladming (Austria), Beijing and Shanghai, London and Manchester, Singapore, Rome, Sydney, and numerous cities in Japan.

Frank Ticheli is the recipient of a 2012 “Arts and Letters Award” from the American Academy of Arts and Letters, his third award from that prestigious organization. His Symphony No. 2 was named winner of the 2006 NBA/William D. Revelli Memorial Band Composition Contest. Other awards include the Walter Beeler Memorial Prize and First Prize awards in the Texas Sesquicentennial Orchestral Composition Competition, Britten-on-the-Bay Choral Composition Contest, and Virginia CBDNA Symposium for New Band Music.

Ticheli was awarded national honorary membership to Phi Mu Alpha Sinfonia, “bestowed to individuals who have significantly contributed to the cause of music in America,” and the A. Austin Harding Award by the American School Band Directors Association, “given to individuals who have made exceptional contributions to the school band movement in America.” At USC, he has received the Virginia Ramo Award for excellence in teaching, and the Dean’s Award for Professional Achievement.

Frank Ticheli received his doctoral and masters degrees in composition from The University of Michigan. His works are published by Manhattan Beach, Southern, Hinshaw, and Encore Music, and are recorded on the labels of Albany, Chandos, Clarion, Equilibrium, Klavier, Koch International, Mark, Naxos, and Reference.