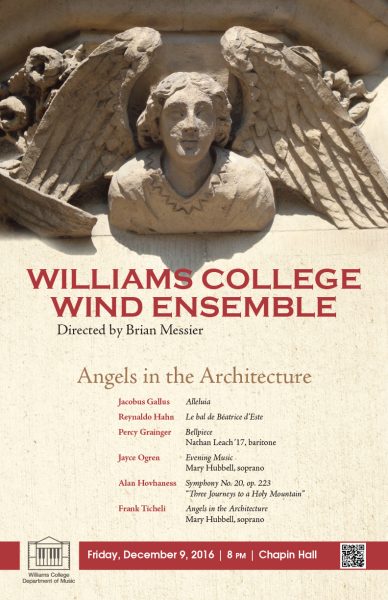 The Williams College Department of Music presents a concert titled Angels in the Architecture with the Williams College Wind Ensemble in concert on Friday, Dec. 9 at 8 p.m. in Chapin Hall. The group, directed by Brian Messier, also features soprano Mary Hubbell, and baritone Nathan Leach ‘17. This free event is open to the public.

About Brian Messier
Prof. Brian Messier’s research on audience attraction, engagement, and retention has resulted in his participation in the New Audiences and Innovative Practices program in Iceland; guest speaking engagements in Minnesota and the Netherlands; and his appointment to the College Band Director’s National Association committee for the advancement of wind music in our culture. In addition to his position at Williams College, Messier is also Artistic Director of The Valley Winds and director of bands at Belchertown High School. Messier is in high demand as a clinician and guest conductor, and specializes in integrating collaborative practice and innovative techniques into the large ensemble setting.

About Mary Hubbell
Mary Hubbell, described in The New York Times as “a soprano with a sweetly focused tone,” holds degrees from Boston College; the University of California, Santa Barbara; and the Royal Conservatory in The Hague. In the Netherlands, she was a frequent soloist with early music ensembles La Prunelle Ensemble and Praetorius Blokfluit Ensemble, and often appeared at the contemporary venues of the Young Composer’s Festival in Apeldoorn and the Gaudeamus Festival in Amsterdam. In the United States, orchestral engagements have included Mozart’s Exsultate, jubilate with the Beaufort Symphony Orchestra, Vivaldi’s Beatus vir with the Chorale Society of the Hamptons, Bach’s Cantata BWV 202 (“Wedding”) with Musica Viva of New York, Barber’s Knoxville: Summer of 1915 with the Amherst College Orchestra, and Mozart’s Mass in C Minor and Haydn’s Creation with the South Hadley Chorale. She also regularly performs in the chamber music group conText, which presents 20th and 21st century music and has commissioned new works from the composers Gregory W. Brown, Inés Thiebaut, and Eric Nathan. Ms. Hubbell is pursuing a DMA at the Graduate Center of CUNY and is an adjunct faculty member of Smith College.