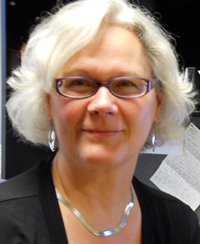 M. Jennifer Bloxam, Professor Music at Williams College, has been named a 2013-14 Fellow in Sacred Music, Worship, and the Arts at the Yale Institute of Sacred Music.  Yale’s Institute of Sacred Music is an interdisciplinary graduate center educating leaders who foster, explore, and study engagement with the sacred through music, worship, and the arts in Christian communities, diverse religious traditions, and public life. With a core focus on Christian sacred music, the ISM builds bridges among disciplines and vocations and makes creative space for scholarship, performance, and practice.

Bloxam’s fellowship project at Yale is Recapturing the Ritual Context of Renaissance Sacred Music, a multi-faceted endeavor at reconstructing a ritual frame around five ambitious pieces of sacred music from the northern European Renaissance. Like a Renaissance triptych, the project has a central focus: a collaborative multi-media exploration of music at the great Marian confraternity in ‘s-Hertogenbosch, concentrating on the sumptuous eight-voice canonic Marian motet Nesciens Mater by Jean Mouton. The side panels of the project “altarpiece” will comprise two linked pairs of essays elucidating the ritual context and communicative strategies of four extraordinary polytextual settings of the Mass Ordinary: two Masses for the Annunciation by Guillaume Du Fay and Johannes Regis; and Nicholas Champion’s “Mary” Masses, one for the Blessed Virgin and one for Mary Magdalene.

The ISM Fellows in Sacred Music, Worship, and the Arts are scholars, religious leaders, or artists whose work is in or turning toward the fields of sacred music, liturgical/ritual studies, and religion and the arts. The fellows have numerous opportunities to share their work with the community and to teach, as well as to work on their individual projects using Yale’s vast resources. The six 2013 – 2014 fellows represent a cross-section of cultures and disciplines.

M. Jennifer Bloxam earned her Bachelor of Music in Music History from the University of Illinois at Champaign-Urbana in 1979, and her Ph.D. in musicology from Yale University in 1987. She joined the Williams faculty in 1986, and teaches courses on medieval, Renaissance, and Baroque music topics, the influence of early music and Bach on modern music, and the Carmen narrative in music, film, and dance. Her research interests include early music and its cultural context, interactions between plainsong and polyphony, narrative and exegesis in 15th and 16th-century sacred music, musical borrowing, and compositional process.  In addition to numerous publications in an array of books and journals, she maintains an ongoing collaboration in concerts, recordings, and film projects with the Dutch vocal ensemble Cappella Pratensis, directed by Stratton Bull, with whom she made the award-winning DVD Missa de Sancto Donatiano (Bruges 1487) by Jacob Obrecht and the accompanying educational website (www.ObrechtMass.com). Her frequent conference presentations and speaking engagements have taken her in recent years to Italy, Belgium, Spain, England, and Switzerland as well as to many American colleges and universities.  Bloxam has twice been awarded a National Endowment for the Humanities Fellowship, and has also received research support from the Fulbright Foundation and the Martha Baird Rockefeller Foundation. She has served on the board of the American Musicological Society, and on the editorial boards of the Journal of the American Musicological Society and the Journal of the Alamire Foundation.

Select Williams facilities and events are open to the public. Admission tours are available and guests are welcome at the Williams College Museum of Art, Sawyer and Schow Libraries and outdoor athletic events. Visitors are also welcome at indoor competitions and some performances and events. Proof of vaccination and masking are required for entry. See the Visiting Campus page for details.