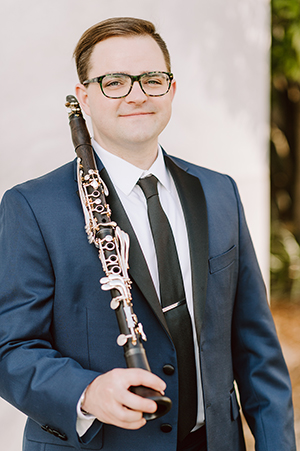 [email protected]
413-597-2127
Bernhard Music Center
Admired for his  “suppleness and beauty of tone” (Allan Kozinn, New York Times), Bixby Kennedy is one of the most versatile clarinetists of his generation. He has performed concertos with the Minnesota Orchestra, Houston Symphony, and New Haven Symphony Orchestras. As a chamber musician, he has performed throughout the US and Europe in venues including Carnegie Hall, Alice Tully Hall, the Kennedy Center, Marlboro Music Festival, and is the clarinetist for the “explosive” New York City based chamber ensemble Frisson. As an orchestral musician, he currently holds titles as the Associate Principal Clarinetist of the New Haven Symphony Orchestra, Associate Principal in the Albany Symphony, and the Principal Clarinetist of Symphony in C. He has appeared as a guest artist with the Saint Paul Chamber Orchestra, and Orpheus Chamber Orchestra, and has held teaching appointments at University of Massachusetts Amherst, Vanderbilt University, and Tennessee State University. He is currently Artist Associate in Clarinet at Williams College in Williamstown, MA. On period instruments, he performs classical repertoire on original and replica instruments throughout the US. Bixby Kennedy is a sponsored artist with Backun Musical Services, and performs on their instruments. He is a former member of Ensemble Connect and works as a teaching artist throughout the US. He loves traveling, trying new foods, laughing, hiking, and playing tennis.
https://www.bixbykennedy.com
Music MENU