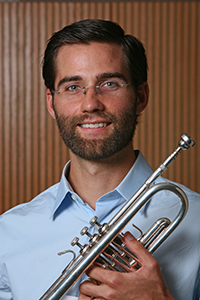 Artist Associate in Trumpet and Director of Brass Ensemble

Acclaimed trumpeter David Wharton is an active performing artist on the East Coast. His diversity as a performer spans the Orchestral, Contemporary, Baroque, and solo repertoire. He is currently the Principal Trumpet of the Berkshire Symphony and the Williams Chamber Players. Wharton is also a member of the Delphi Chamber Orchestra and the contemporary music ensemble Le Train Bleu, based in New York City. Other ensembles he has performed with include the Hartford Independent Chamber Orchestra, New Haven Symphony, Wallingford Symphony, and Riverside Symphony, as well as the Quiet City Brass and Triton Brass Quintets.
At Williams College, Dr. Wharton serves as the Artist Associate in Trumpet and director of the Williams College Brass Ensemble. David is also the advisor and founder of the Williams Fishing Club. In addition to his duties at Williams, Dr. Wharton serves on the faculty at the University of Rhode Island and the Hartt School of Music Community Division.
Wharton enjoys performing frequently as a soloist on the baroque trumpet. He is a member of the American Baroque Orchestra and has appeared with the Indianapolis Baroque, Concert Royal, the Sebastian’s, and the Connecticut Early Music Festival Orchestras, as well as Yale’s Schola Cantorum. Praised for his beautiful tone and flawless ornamentation, Wharton won first place at the National Trumpet Competition in the baroque category in 2007.
David lives in central Connecticut with his wife Elisa and Son Wyatt. He is a graduate of the University of Connecticut, Yale School of Music, Oberlin Conservatory, and Interlochen Arts Academy.
Music MENU

The spring semester is underway. See our Covid-19 website for strict health and safety protocols for those who remain on campus. All Williams College buildings are closed to the public and visitors until further notice.
MENU