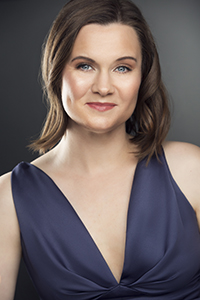 Artist Associate in Voice and Co-Director of the Williams Opera Workshop, Instructor

Erin Casey, soprano, was recently seen with The New Opera company as Belinda in Dido and Aeneas; a role in which she “acquitted herself admirably…” and “her voice was consistent, well-balanced, and beautiful…” (Michael Miller, The Berkshire Review for the Arts).  She is a frequent soloist with the Williams Chamber Players and The New Opera Company of Williamstown, Massachusetts, and performed at the historic Colonial Theater in Pittsfield, MA for the Made in the Berkshires Festival.  She was featured in an abbreviated version of The Marriage of Figaro as Countess Almaviva at the Adams Memorial Theater in January of 2013.  Other roles include Micaëla in Tragédie de Carmen, Mimì in La Bohème, Pamina in Die Zauberflöte, Soeur Constance inDialogues of the Carmelites, Adele in Die Fledermaus, and Jenny in Company. Other New England area performances include appearances as the soprano soloist in Igor Stravinsky’s Les Noces, G.F. Handel’s Messiah and Carl Orff’s Carmina Burana in Vermont, and J.S. Bach’s Magnificat in New York.  She received First Prize in the American Academy of Conducting at Aspen Vocal Concerto Competition, Third Place in the Bel Canto Foundation Competition, and she was the recipient of the Francesco and Hilda Riggio Award in the New England Regional Metropolitan Opera National Council Auditions.  She was the soprano soloist in John Adams’ Grand Pianola Music, Fauré’s Requiem, Vaughn Williams’ Hodie, and Schumann’s Frauenliebe und Leben. She received a Bachelor’s Degree in Music Education from DePaul University, and a Master’s Degree from Northwestern University in Vocal Performance.  She has been an Artist Associate since 2006, and is co-director of the Williams Opera Workshop with colleague Paul La Rosa.