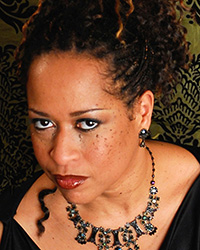 Samirah Evans is an Artist Associate in Jazz Voice at Williams College. During her 25-year career as a performer and recording artist, she has become known for her dynamic, soulful approach to jazz and blues, among other genres.

Her musical style is also heavily influenced by the New Orleans sound where she was one of the city’s most popular and in-demand singers. Her 1990 debut at the New Orleans Jazz and Heritage Festival began a stint of 15 consecutive years performing there as a leader or featured vocalist, and she was a fixture in both clubs and concert venues throughout the Crescent City, including Snug Harbor, Tipitina’s and the House of Blues. During her career, she has toured North and South America, Europe and Asia, sharing stages with a multitude of New Orleans notables and legendary artists, including James Brown, B.B. King, Sheila Jordan, Terence Blanchard, Donald Harrison, Jr., Poncho Sanchez, Charles Neville, Bob Dorough, Irma Thomas, Kermit Ruffins, Trombone Shorty and Sam Kininger.

The New Orleans Times Picayune named Evans’ debut CD, Give Me a Moment, the fifth best new release of 2002. She has recorded two other full-length CDs as a leader, My Little Bodhisattva (2007) and Hot Club: Live at the Vermont Jazz Center (2009), as well as several single song downloads of original compositions. She has also appeared as a featured or supporting vocalist on several New Orleans artist recordings and compilations.

Hurricane Katrina caused Samirah to relocate to her husband’s hometown of Brattleboro, Vermont. She has since been performing in venues and festivals throughout the northeast with her band, Samirah Evans and Her Handsome Devils, as well as with Jamoie and His Jasssz Band, among other projects.

Evans dedicates time to perpetuating indigenous American music. She was a long-time participant in the Blues Schoolhouse program sponsored by the International House of Blues Foundation. She also served as a volunteer show host on the New Orleans Jazz and Heritage radio station, WWOZ, for over 10 years. In Brattleboro, she founded a musical mentoring concert program called “Sam’s Set and Shed,” bringing artists and their proteges into a jam session setting with area musicians. She currently curates the “Ladies in Jazz” series at The Arts Block in Greenfield, Mass, a concert concept she founded to highlight collaboration between female singers and musicians.

Evans has been giving private vocal lessons since 2010. Her students have ranged from age eight to over sixty, but the majority have been high school students interested in pursuing a music career. She emphasizes vocal techniques that pertain to any genre of music, including jazz, blues, pop and musical theater. She has found that teaching has been the most gratifying facet of her artistry because of how transformative it has been in the lives of those she teaches.