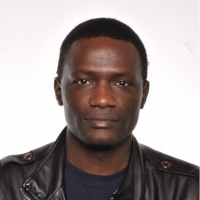 Artist in Residence in African Music Performance, Lecturer in Music, Director of Zambezi, Co-Director of Kusika

Tendai Muparutsa is an internationally known performer, music educator, ethnomusicologist and bandleader. He participates in a multitude of Zimbabwean and African music circles in North America, and collaborates with musicians and instructors from all over Africa. His work encompasses everything from performing with afro-pop groups to teaching at African music camps to directing mbira, marimba and dance ensembles. His high energy, humor and passion for sharing African music delight audiences and students alike. Tendai co-directs Kusika and the Zambezi Marimba Band

Tendai’s research has been diverse and his passions are many. He has explored, through both academic study and personal experience, the following: the music of Southern Africa; general music education with an emphasis on multicultural philosophy; popular music; jazz history; music and gender; African and African-American music collaborations in diasporas; and African choral music styles and how they interact with North American styles. His enthusiasm for cross-cultural music experiences results in many rich and exciting collaborative projects.